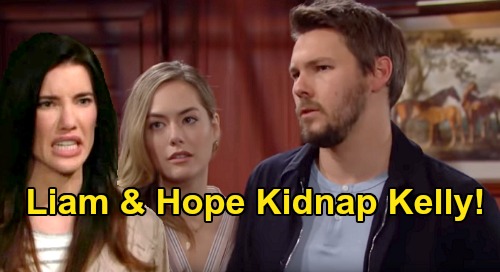 The Bold and the Beautiful (B&B) spoilers tease that Steffy Forrester (Jacqueline MacInnes Wood) will struggle to hide her growing drug addiction. It’ll become particularly tough after Liam Spencer (Scott Clifton) spots Steffy passed out on painkillers during the week of September 21-25.

That should lead to some accusations from Liam and denials from Steffy. She’ll have to lie to cover up what’s really going on – and Steffy will blow her top at Liam to further mask the real problem.

Liam will make a choice regarding what’s best for his family, but it won’t go over well with Steffy. The Bold and the Beautiful spoilers say Steffy will make a discovery that concerns Kelly Spencer and will fly into a rage.

B&B fans can expect Steffy to call Liam and Hope Spencer (Annika Noelle) out as kidnappers for abducting her daughter! Steffy will be adamant that Hope and Liam straight-up kidnapped Kelly.

Liam may send Kelly back to the cabin with Hope over this passed-out incident and fill Steffy in once she’s coherent enough. That’s when we might hear these kidnapping accusations along with Steffy’s demand to get Kelly back. Steffy might even march herself over to the cabin herself if she has to.

You can bet Steffy’s going to lose it – especially since Hope already took “Phoebe Forrester” aka Beth Spencer (River Davidson and Madeline Valdez) back from her. This will be Steffy’s worst nightmare all over again, so there’s no way she’ll stand for this.

Nevertheless, Liam may feel like he has to deliver some tough love with Steffy here – both for Steffy’s sake and for the sake of the daughter they share. If Liam feels Kelly is at risk, he’ll do whatever he has to do.

Liam and Hope will surely consider these kidnapping accusations extreme. They’ll want Steffy to calm down and see that she needs help, but Steffy will think they need to stop abducting children!