The Bold and the Beautiful Spoilers: Steffy Confesses Kiss Truth – Will Liam Forgive or Let ‘Steam’ Reunion Crash and Burn? 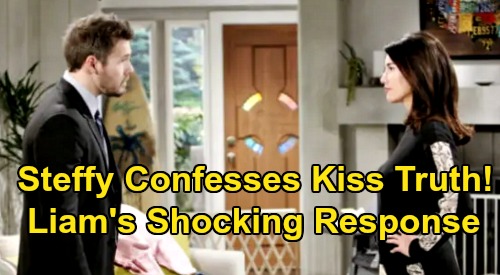 The Bold and the Beautiful (B&B) spoilers tease that Steffy Forrester (Jacqueline MacInnes Wood) will face a difficult decision. The trouble will start when Steffy overhears Thomas Forrester (Matthew Atkinson) talking about her kiss with Liam Spencer (Scott Clifton). He’ll probably gloat to Vinny Walker (Joe LoCicero) about that being the catalyst for his inevitable “Thope” reunion.

Thomas will definitely talk about his undying love for Hope Logan (Annika Noelle) and convince Steffy that he hasn’t moved on. She tried to hold out hope that Thomas’ relationship with Zoe Buckingham (Kiara Barnes) was legit, but any faith she had left will evaporate. Steffy will hate feeling like her brother is a terrible person, but that’s pretty much where she’ll be at on things.

The Bold and the Beautiful spoilers say Steffy will corner Thomas and demand some answers soon after. She’ll rip her brother to shreds over his past mistakes as well as his current ones.

Steffy will wonder how Thomas can just use people like it’s nothing. She’ll be totally appalled with Thomas’ behavior, but he’ll defend himself and argue that Steffy’s so close to getting what she wants, too.

Steffy would indeed like a reunion with Liam Spencer (Scott Clifton), but at what cost? B&B viewers can expect Steffy to wrestle with what she does next. She’ll know it could cause a serious “Steam” setback if she goes to Liam and divulges the whole story.

Steffy can’t fully explain her proof against Thomas without revealing that she was part of his manipulation. She let him rope her into that plan to make sure Hope saw the kiss. Liam has always insisted that Steffy shouldn’t be blamed for the bad timing. He has no clue that Steffy knew Hope would be standing there to witness it.

The Bold and the Beautiful spoilers, updates and news say Steffy will weigh her options. She’ll have to determine if she’s willing to sacrifice her happiness for Zoe and Hope’s sake. They’re both being manipulated and it needs to stop – especially before Thomas and Zoe’s rushed wedding happens.

With that in mind, Steffy will make the tough choice to take her latest evidence to Liam. The Bold and the Beautiful spoilers confirm the truth about the lip lock will come out, so it sounds like Steffy will confess. Will Liam be able to forgive Steffy for her deception or will their reunion crash and burn before it even takes off?

Whatever the case, Thomas’ world is about to blow up! His wedding will become a major fiasco during the week of March 9-13. As other updates and news become available, B&B fans will want to check out all our hot Bold and the Beautiful spoilers.