BY Heather Hughes on March 11, 2020 | Comments: one comment
Related : Soap Opera, Spoiler, Television, The Bold and the Beautiful 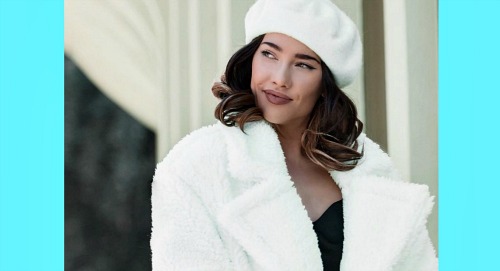 The Bold and the Beautiful (B&B) spoilers tease that Steffy Forrester (Jacqueline MacInnes Wood) fans are hoping for big changes. Now that Liam Spencer (Scott Clifton) and Hope Logan (Annika Noelle) have reunited, B&B might as well just ahead and give “Lope” a new chapter. Their last one was short-lived thanks to Thomas Forrester (Matthew Atkinson) drama, but that they have another chance at a fresh start.

Of course, fair is fair! Doesn’t Steffy deserve a fresh start of her own? This is the perfect opportunity to let Steffy explore a new path – preferably one that doesn’t include a repeat of her heartbreak. Many Bold and the Beautiful viewers are calling for Steffy to get a new man who isn’t a Spencer. It’d be great if Steffy could have some new blood and someone who was truly devoted to her.

Let’s look at what a few B&B fans had to say on Twitter. “Can’t get a new man for Steffy, we been begging for YEARS,” one viewer complained. “I just don’t get why Steffy can’t get a new man that is strong and not a Spencer man,” another Bold and the Beautiful fan said.

One more B&B watcher insisted, “Why anyone would want Steffy with Liam or Bill is beyond me…They need to bring on a man that hasn’t been with anyone on canvas.” Another fan echoed that idea and argued that Steffy needed a brand-new storyline, too. “It’s beyond time. Move Steffy on to a story where’s she the central figure!” this irritated viewer tweeted.

Of course, Steffy might want to focus on herself for a while. She may throw herself into work for a bit, which would bring a shot at some new fashion stories. Maybe they could even bring a handsome newbie into the picture that way – like a new buyer, a rival executive or perhaps a hunky model.

Regardless, Steffy deserves the chance to move on when the time is right. Liam and Hope are seemingly getting their happily ever after – at least for now. Steffy’s the loser of this love triangle again, but that could be a blessing in disguise. If B&B finally caves and offers up a new man for Steffy, the loss would certainly be worth it.