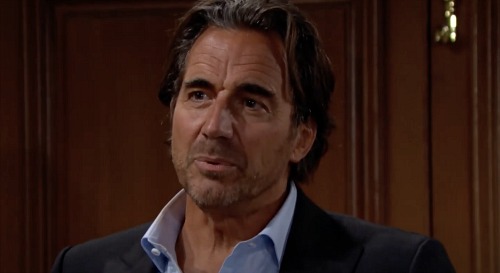 The Bold and the Beautiful (B&B) spoilers tease that Steffy Forrester (Jacqueline MacInnes Wood) will have some heartfelt amends to make. As B&B viewers know, Steffy let her loved ones really have it when she was abusing opioid painkillers.

Steffy went off on Liam Spencer (Scott Clifton) and Hope Spencer (Annika Noelle) pretty hard with some hurtful words and accusations while she was under the influence of the pills, and Steffy even lashed out toward Brooke Forrester (Katherine Kelly Lang) as well.

But perhaps the person who got the worst of Steffy’s anger during her tirade was her dad, Ridge Forrester (Thorsten Kaye).

As B&B viewers will remember, Steffy lashed out at her dad big-time during the big standoff at Brooke’s place as she brandished a knife and told her father that she hated him for allowing Brooke to break up their family.

It was a terrible scene, and B&B viewers could tell that Ridge was in a great deal of pain to hear Steffy’s words.

Of course, Ridge knew (and still knows) that Steffy’s words and thoughts were clouded by the drugs. Yet Ridge must feel like Steffy’s feelings came from somewhere, and he might want to address those feelings with Steffy when the time is right.

Steffy has mentioned to John “Finn” Finnegan (Tanner Novlan) that Ridge has been to visit her and Kelly Spencer (Colette and Avalon Gray) since she’s been home from rehab, but viewers haven’t seen any of their interactions.

Well, that’s all about to change during the week of October 26-30, as viewers will get to see some heartfelt moments between Ridge and Steffy. Perhaps Steffy will take the opportunity to tell her father how much he means to her, and how happy she is that he and Brooke are back together.

And while she’s at it, Steffy may also ask for her father’s forgiveness for her hurtful words during the standoff at Brooke’s place.

Making amends is an important part of the recovery process, and since Steffy’s been through an intensive rehab treatment, it stands to reason that she might try to make amends to her dad for all the hurtful things that she said to him during that horrible scene.

Of course, Ridge will probably say that amends aren’t necessary, and that he loves his daughter no matter what.

But Steffy will probably want to address what she said to her father and make sure that he knows that she doesn’t hate him deep down, and that her words came from a place of deep pain.

The Bold and the Beautiful spoilers say we’ll see some truly nice father/daughter moments between Ridge and Steffy that are long overdue, as they work through what happened and put it behind them once and for all.

We also suspect that we’ll see a nice conversation between Ridge and Steffy about the role of Finn in Steffy’s life. Ridge must know by now that Steffy and Finn are getting serious, and Steffy might even share that she loves Finn with her dad.

We’ll see how Ridge feels about that – he might worry that things are moving fast, but then again, he’ll probably love to see Steffy happy and healthy and doing well in her recovery.

Are you looking forward to some nice, tender moments between Steffy and Ridge? Stay tuned to the CBS soap and be sure to keep CDL at the ready for all the latest Bold and the Beautiful spoilers, daily episode recaps, and news.