The Bold and the Beautiful Spoilers: Steffy Relapse Drama – Will Finn Problems Lead Steffy Back Into Addiction? 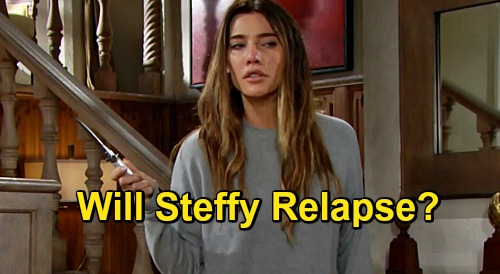 The Bold and the Beautiful (B&B) spoilers tease that Steffy Forrester (Jacqueline MacInnes Wood) is finally back on her feet after a terrible battle with opioid painkillers.

As B&B viewers know, Steffy was in a very bad place when she was at her lowest, even threatening her loved ones with a knife at one point. But in a tough recovery battle that occurred off-screen, Steffy overcame her addiction and emerged from rehab stronger than ever.

Steffy’s grateful for her recovery, and she seems to be resolved never to go down the path of addiction again.

Plus, Steffy has everything to stay clean and sober for – she’s got her daughter Kelly Spencer (Colette and Avalon Gray) and a new relationship to forge with John “Finn” Finnegan (Tanner Novlan) that she’s excited about.

But despite all of the great things going for her, there’s the very real possibility that Steffy could relapse if the right circumstances are met.

The rates of relapse are very high, so statistically, Steffy will always be at risk for a relapse, and one wonders if TPTB have any plans for Steffy to go back down the addiction road in the future.

Of course, with all of the blustering that Liam Spencer (Scott Clifton) is doing about Finn these days, it’s always possible that in the end, Liam’s gut feeling about Finn could end up being right.

What if it came out that Finn wasn’t such a great guy, and he has hidden issues? How might that affect Steffy?

Another failed relationship, and especially some hidden deception on Finn’s part, could be really painful for Steffy. Right now, Finn’s life is basically a blank slate, and all we really know about him is that he says that he’s always put his career first and that he’s always wanted kids.

Who knows – TPTB could decide that Finn will suddenly be revealed to have a long-lost crazy ex or someone else from his past who could make Steffy’s life miserable going forward.

That would certainly present a situation in which Steffy could be prone to relapsing. And certainly, if Steffy were to experience a medical crisis or suffer another accident and was in need of pain medications, that could open the door to her becoming dependent again.

But we suspect that emotional pain could just as easily open the door to dependency again, and it seems like that would be tied to someone close to Steffy – either Kelly or Finn.

Of course, none of this is to say that we want Steffy to relapse at all, but since TPTB need to keep the drama going, you never know when a relapse could crop up for Steffy down the line.

Do you think that B&B would go there and have Steffy get addicted again? Stay tuned to B&B and don’t forget to keep CDL bookmarked for all the latest Bold and the Beautiful spoilers, daily episode recaps, and news.