The Bold and the Beautiful Spoilers: Steffy Sets Up Liam Relationship Disaster – Thomas’ Promise of ‘Steam’ Dreams Blows Up

BY Heather Hughes on January 18, 2020 | Comments: one comment
Related : Soap Opera, Spoiler, Television, The Bold and the Beautiful 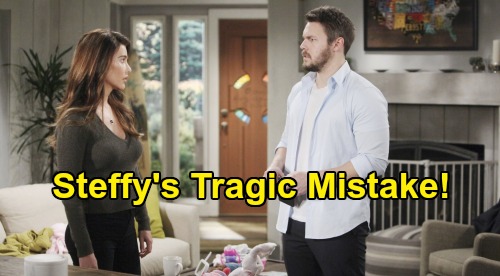 The Bold and the Beautiful (B&B) spoilers tease that Thomas Forrester (Matthew Atkinson) will think his vision for the future will soon become a reality. He’ll be over the moon and somewhat surprised when he tries to comfort Hope Logan (Annika Noelle) over her split from Liam Spencer (Scott Clifton). Hope will actually be quite receptive to Thomas’ kind words and warm embrace.

Thomas is a confident guy, so he always knew his plan would work out at some point. However, he probably didn’t expect it to happen so soon after Hope’s breakup.

Thomas will really hit the jackpot here, but he’ll wind up in panic mode when Steffy Forrester (Jacqueline MacInnes Wood) threatens to derail everything. He’ll fear his sister’s guilty conscience is going to burst his “Thope” bubble.

However, Thomas is the kind of person who tackles problems head-on. He’ll catch Steffy on the verge of telling Liam her secret, which is that Thomas pushed her to kiss Liam and set it in motion for Hope to see.

Thomas will worry that tidbit could cause major issues for “Steam” since Liam hates Thomas so much. He’ll manage to thwart Steffy’s confession plan before making an important vow.

The Bold and the Beautiful spoilers say Thomas will make a huge promise. He’ll insist he can make all Steffy’s dreams come true. Thomas will paint a picture of the life Steffy wants – a life where Liam’s there every morning to wake up with Kelly Spencer (Zoe Pennington) and a life where he accepts Steffy’s the woman he needs.

Thomas will feel like Steffy can have all that and more if she does what he asks. In addition to Steffy’s silence about his involvement in the recent kiss, Thomas may want her silence on any other plots he cooks up.

Thomas might assure Steffy that he won’t do anything too crazy. Thomas will just want an opportunity to pull Hope closer. He may encourage Steffy to do the same when it comes to Liam. Thomas will try to scheme with his sister a bit and hope it pans out.

The Bold and the Beautiful spoilers say Steffy will have some reservations, but B&B fans know Thomas can be pretty convincing. He’s as manipulative as they come, so he should shut down Steffy’s admission plans and keep her on his side for now.

Thomas will assure Steffy that she’ll get the result she deserves – a perfect “Steam” family.

Steffy could be setting herself up for disaster, but she’ll put her trust in Thomas and count on him to give her the world. We’ll give you updates as other B&B news comes in. Stay tuned to the CBS soap and don’t forget to check CDL often for the latest Bold and the Beautiful spoilers, updates and news.