The Bold and the Beautiful Spoilers: Steffy’s Accident Escalates Ridge and Bill War – But Who’s Really To Blame? 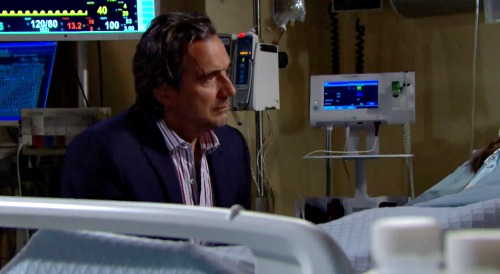 The Bold and the Beautiful spoilers tease that Ridge Forrester (Thorsten Kaye) will confront Bill Spencer (Don Diamont) when he learns details about Steffy Forrester’s (Jacqueline MacInnes Wood) accident. Devoted fans won’t be surprised by that reaction, based on the history of conflict between these characters.

But Bill never intended to create the motorcycle crash. Based on what viewers have been able to see so far, Diamont’s character was in the middle of an intersection as Steffy was approaching. She appeared to hit him broadside, indicating that one, or both parties may have broken traffic laws.

Bold And The Beautiful Spoilers – Did Bill Spencer Go Through A Red Light?

It’s possible that Bill was distracted by his thoughts, a phone call, was adjusting some electronic device in his vehicle, or simply didn’t stop at a red light, or stop sign. Closeup shots were later blurred, which didn’t allow enough information to be known which could have definitively confirmed what happened.

So, a resulting accident investigation will be needed. The results will either place blame on Bill, or shift it to the person who was hurt in this crash.

Bold And The Beautiful Spoilers – Was Steffy Forrester Speeding?

Sometimes it can be difficult to determine if a motorcycle rider is speeding. Due to the loud sounds of some engines, it may appear that the revolution noise alone indicates excessive speed, when that may not be the case.

Steffy had her helmet on, which Dr. John Finnegan (Tanner Novlan) knows helped to save Ridge’s daughter’s life. But, like assumptions regarding Bill, she may have run a red light, or stop sign.

Because of the crash either Ridge or Steffy was at fault, or one of those characters was more at fault than the other. However, neither person wanted the crash to happen, so no bad intent applies.

It’s natural that Ridge panicked after receiving Bill’s call about Steffy being in the hospital. It also made sense that Kaye’s character began wondering why Bill learned this information before him and also was at the hospital.

Ridge began questioning Bill about how he learned the news when Dr. Finnegan came out of Steffy’s room. That led to Ridge seeing Steffy, while Bill and Brooke Logan (Katherine Kelly Lang) began having a difficult and revealing conversation. The outcome of that talk foreshadows big trouble ahead.