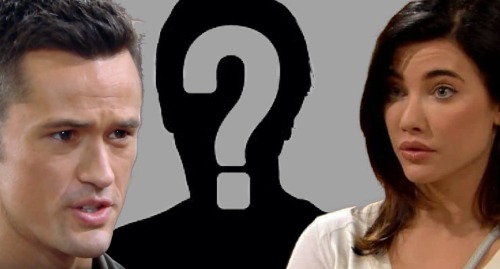 The Bold and the Beautiful (B&B) spoilers tease that some new characters are set to hit the CBS soap – and one is a potential love interest for Steffy Forrester (Jacqueline MacInnes Wood). A mystery actor has been cast in a brand-new role that’s yet to be revealed, but we can go ahead and start thinking about how this guy will fit in the canvas.

Since we know Wood will be working closely with this actor, we have to think about why Steffy would be around this guy so much. It’s reasonable to assume this may be related to an employee at Forrester Creations.

Thomas Forrester (Matthew Atkinson) has become a disgrace to the Forrester family and is MIA for the time being. Could Steffy’s new man be a replacement designer who joins FC?

It’s easy to imagine Steffy collaborating with this guy on a new line and getting to know him better in the process. Steffy might be blown away by his talent and hire him to be part of the team.

We also know that Steffy’s upcoming B&B story centers on an informative issue of some sort. If Steffy falls for a guy who works for her, that might fit the bill.

This might add a complicated layer to this Bold and the Beautiful romance and give Steffy a reason to resist at first. Steffy might think it’s inappropriate since she’s this man’s boss. That could be a problem if Steffy’s unable to resist him! Steffy might enter risky territory anyway and kick off some interesting challenges.

Of course, there’d also be the drama of Thomas finally returning and wanting back in at Forrester Creations. This could set Thomas up to loathe this guy instantly. Thomas loves his sister despite his mistakes and how he’s treated Steffy lately.

He doesn’t like outsiders in Forrester country, so there’d be plenty of reasons for Thomas to become this man’s rival.

Thomas could use someone else to go up against when new episodes return, so this would be a fun way to take things. Could you see Thomas sparring with the new man in Steffy’s life – especially if that man stole Thomas’ job in his eyes?

Thomas might plot to dig up dirt or even invent some to get this guy thrown out of the company. A rivalry like this would deliver a lot of potential.