The Bold and the Beautiful Spoilers: Surprise Weddings on B&B – Which Characters Will Soon Marry? 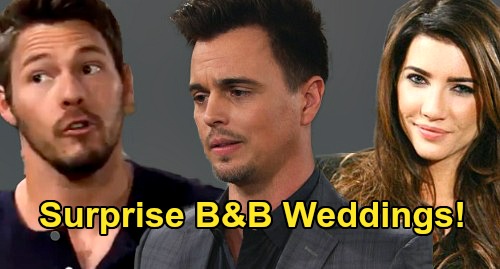 The Bold and the Beautiful spoilers tease that various characters are primed to marry on B&B. Who among them is most likely to do so is a subjective plot point.

Considering where various storylines left off in late April, when the production shutdown occurred, it’s fair to speculate about which couples could marry sometime before the end of the calendar year.

With B&B having returned to production within the last few weeks, new episodes could begin airing later this month, which would restart predicted wedding speculation in full.

Flo Fulton (Katrina Bowden) was knocked unconscious in April. It seems unlikely that B&B would write this character into coma that lasts until 2021. So, Flo will awaken when new episodes begin, or within a reasonable amount of time thereafter.

She will tell Wyatt Spencer (Darin Brooks) that Sally Spectra (Courtney Hope) lied about dying, which will likely trigger Hope’s character into dishing about her revealed friend’s (Dr. Penny Escobar, as played by Monica Ruiz) role in knocking Flo out. Wild dialogue could surely ensue, where Sally’s bargain with Penny will be divulged.

The above paragraph would eliminate the likelihood of Sally as having a future with Wyatt, leaving Flo as his reinforced true love and next wife.

It was cute that Douglas Forrester (Henry Joseph Samiri) pretended to officiate Hope Logan’s (Annika Noelle) and Liam Spencer’s (Scott Clifton) remarriage in the cabin this spring. But that young man isn’t a licensed official.

So, B&B fans should expect Carter Walton (Lawrence Saint-Victor) to handle the honors. The ceremony could be small and also take place in the cabin, where Douglas stood. But viewers know that this projection is rather easy to make, as another edition of Lope appears destined.

Steffy Forrester (Jacqueline MacInnes Wood) has chosen to be single for awhile. She seemed to officially pull herself out of Liam’s atmosphere earlier this year, which was a healthy decision.

Buzz indicates that B&B is writing a new man into Steffy’s life. A few week’s worth of courtship would seem unbelievable. But a wedding by Christmas would meet the boundaries of this feature, in that it would happen before the end of 2020. What this couple’s nickname would be is unknown, since the new character’s name is a mystery for now.