The Bold and the Beautiful Spoilers: Thomas Needs A Real Romantic Partner – But Is He Still Pining After Hope? 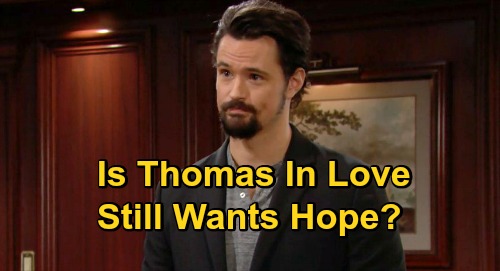 The Bold and the Beautiful (B&B) spoilers tease that Thomas Forrester (Matthew Atkinson) seems to be in a weird transition period right now. As B&B viewers know, Thomas is getting his life back together after all the upheaval from his disastrous near wedding to Zoe Buckingham (Kiara Barnes) earlier this year.

Thomas’ manipulative ways were exposed, but now he really seems to be working on himself and trying to be a productive member of his family and the family company.

Although this has wholly occurred off-screen, Thomas has become a positive force in Douglas Forrester’s (Henry Joseph Samiri) life once again, and Thomas and Hope Spencer (Annika Noelle) seem to be getting along well with their co-parenting efforts.

Even Liam Spencer (Scott Clifton) has had some semi-civil conversations with Thomas lately, which is a big step for both men.

It seems like the next step for Thomas should be a real, solid love interest. Let’s face it, Thomas has been pining after Hope for long enough, and there have been some clues on the show that he hasn’t totally given up on Hope.

For example, Thomas was seen in one episode daydreaming about past times with Hope, and now he seems to be determined to design for Hope For The Future again.

Thomas seemed jealous when Zende Forrester Dominguez (Delon de Metz) came onto the scene and swooped into the head design chair for Hope for The Future.

In recent episodes, Thomas has been strongly suggesting to Hope that she use multiple designers on her line, so that he can continue to work closely with her. So, is Thomas still pining over Hope, the way that its seems?

Let’s hope not, since Thomas’ feelings for Hope have gotten him into a lot of trouble in the past. Besides, it seems that Hope is NEVER EVER going to want Thomas, as she has eyes only for Liam at this point.

But this does beg the question of what TPTB plan to do with Thomas romantically going forward. After all, Thomas needs love too!

It really seems like Thomas needs a strong, new woman in his life. But who would that be, realistically? Thomas apparently tried to see if Zoe would give him another chance, but she wanted nothing to do with him, for obvious reasons.

Who else is on canvas that Thomas could pair up with? Perhaps the answer is that Thomas needs someone new – a new character to ground him and really bring out the best in him.

Of course, there is someone coming on canvas soon, and that will be Zoe’s sister Paris Buckingham (Diamond White). We don’t know much about the character yet, or whether Paris will come onto canvas single and ready for a relationship, but that could be one option for Thomas.

Of course, if Paris gets involved in the seemingly inevitable triangle with Carter Walton (Lawrence Saint-Victor), Zende, and Zoe, then that might take her out of the running for Thomas.

We’ll see what happens here, but we think that Thomas needs a strong leading lady to pair up with. It would be interesting to see Thomas blossom and grow into a new relationship.