BY Heather Hughes on January 25, 2020 | Comments: one comment
Related : Soap Opera, Spoiler, Television, The Bold and the Beautiful 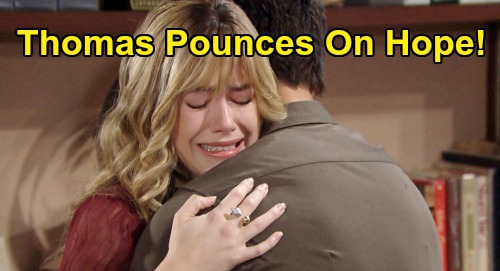 The Bold and the Beautiful (B&B) spoilers tease that Liam Spencer (Scott Clifton) seems poised to move on with Steffy Forrester (Jacqueline MacInnes Wood), which is exactly what Thomas Forrester (Matthew Atkinson) wants. For quite some time now, Thomas has envisioned his own future with Hope Logan (Annika Noelle) and Liam out of the way with a Steffy reunion.

Unfortunately, there could be a flaw in that plan. Thomas may be underestimating just how much Liam hates his guts and views him as a threat. Even putting aside Steffy’s secret about Thomas nudging her into the kiss, there are bound to be issues.

Despite “Steam’s” reconnection, Liam will struggle to watch Thomas reel Hope in. The Bold and the Beautiful spoilers say Thomas will console Hope over her split, which Liam should be furious about. I

f Liam gets wind of that, he’ll feel like Thomas is taking advantage of Hope as usual. This could serve as a distraction from Liam’s growing bond with Steffy. She may feel Liam being pulled back in Hope’s direction as he longs to protect her. 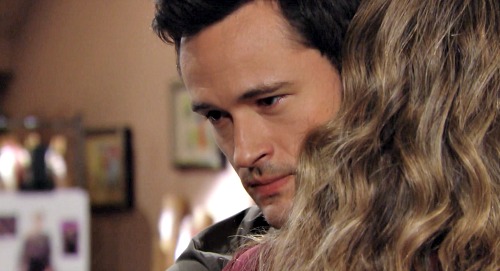 B&B fans know Hope finally decided she couldn’t take any more waffling. She feels like Steffy’s always going to come between them, so she had to walk away from Liam.

Of course, the same could be said about Hope always coming between Liam and Steffy. The truth is Liam’s the real problem here. He just can’t commit to one woman for very long.

As Thomas inches closer to Hope, Liam may not be able to stand by and watch it. Steffy probably won’t get the attention she needs from Liam due to this Thomas feud.

There’s been a lot of talk about Thomas’ obsession with Hope, but Liam appears to be obsessed with Thomas’ takedown! He’d have to be to make Thomas part of his marriage proposal ultimatum.

Thomas may have a hard time keeping Liam focused on Steffy and out of his business. Will Liam’s protective side take over again and cause a “Steam” reunion setback? The Bold and the Beautiful spoilers say Steffy may have to decide how much she’s willing to put up with!

It sounds like some hot drama’s brewing, so stay tuned. We’ll give you updates as other B&B news comes in. Stick with the CBS soap and don’t forget to check CDL often for the latest Bold and the Beautiful spoilers, updates and news.