The Bold and the Beautiful Spoilers: Thomas Targets Hope Using Douglas and Zoe – Treats Son As A Pawn In Obsessed Scheme 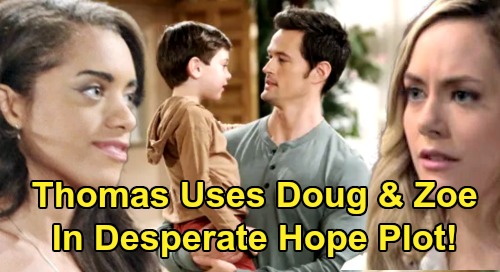 The Bold and the Beautiful (B&B) spoilers tease that Thomas Forrester (Matthew Atkinson) will revert to his darkest tendencies. It’s clear that Thomas’ obsession with Hope Logan (Annika Noelle) brings out the worst in him. Thomas always thinks everything’s under control, but he becomes increasingly fixated and lets things get out of hand.

Unfortunately, Thomas seems poised to follow his typical pattern in the weeks ahead. B&B fans know Thomas is pretending to move on. He’s growing closer to Zoe Buckingham (Kiara Barnes), but his real goal is landing a future with Hope in the end. Liam Spencer (Scott Clifton) realizes what Thomas is up to, but Zoe will remain in denial – at least for a little longer.

However, Liam will do his best to get through to Zoe on this. He’ll want Zoe to understand that when it comes to Thomas, things are never as they seem. Thomas is manipulative and can be quite sinister when he wants to be.

Of course, it doesn’t always start out that way. Sometimes a minor scheme can snowball into something far bigger, which is probably what’s on the verge of happening.

The Bold and the Beautiful spoilers say Thomas will sense this is his opportunity to strike. Hope will be the perfect blend of vulnerable from her breakup and ready to move on with her life. Those are ideal conditions for Thomas to make his move.

The Bold and the Beautiful spoilers say Thomas will plan a big Forrester family dinner. There’s a good chance Thomas will want Hope to get in on that as Douglas Forrester’s (Henry Joseph Samiri) legal mother.

It turns out Douglas will be a huge part of what happens next. Thomas will once again use Douglas as a pawn in his twisted game. Zoe will remain crucial to Thomas’ plot as well, so what will he have in mind?

Will Thomas recruit Douglas for a marriage proposal to Zoe? Thomas coached Douglas on how to help with one to Hope, so he might do something similar with Zoe. He can brainwash the kid into going along with about anything.

Then again, Thomas’ plan might involve a surprising way to make Hope jealous. Since Hope adores Douglas, maybe Thomas will want her to feel like she’s being replaced by Zoe. He might encourage Douglas to give Zoe all his attention, which could leave Hope feeling like her role’s being threatened.

Thomas can be unpredictable when it comes to his plots, so he might have some other shocker in the works. Regardless, The Bold and the Beautiful spoilers say Thomas won’t stop until he gets what he wants or blows his life up – whichever comes first!

It sounds like Thomas will spin out thanks to his Hope fixation, so don’t miss all the action. We’ll give you updates as other B&B news comes in. Stay tuned to the CBS soap and don’t forget to check CDL often for the latest Bold and the Beautiful spoilers, updates and news.