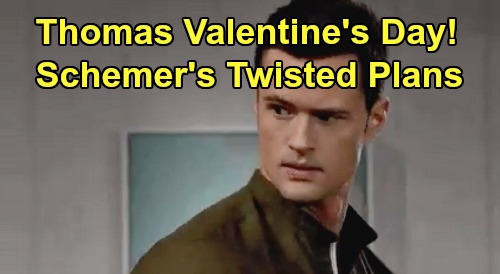 The Bold and the Beautiful (B&B) spoilers tease that an important day’s coming up for Thomas Forrester (Matthew Atkinson). It’s one that he simply can’t ignore. Valentine’s Day is on the horizon, so we have to consider what tricks Thomas will have up his sleeve.

There’s no way the twisted doctor of love himself will forget about the most romantic day of the year. Thomas probably already has Valentine’s Day in the back of his mind. He’s a very strategic guy, so you can bet he’ll have some manipulative plans in store.

Of course, Valentine’s Day may be delayed due to the latest preemptions, but it’ll indeed happen at some point. When it does, what stunts will Thomas pull?

For starters, Thomas will undoubtedly want to make sure Steffy Forrester (Jacqueline MacInnes Wood) and Liam Spencer (Scott Clifton) have a steamy evening. The closer those two are, the better off Thomas is – at least in terms of getting what he wants.

What Thomas wants is still Hope Logan (Annika Noelle), but he’s stringing Zoe Buckingham (Kiara Barnes) along for the sake of his scheme. Will Thomas use Valentine’s Day as a tool to win Hope over? That seems highly likely, but there are a couple different tactics Thomas could use there.

Thomas could set up some situation where he’s alone with Hope – something like one of his old traps. He could make it seem like a coincidence and pretend he’s bummed about not spending the evening with Zoe.

Thomas could even manipulate Douglas Forrester (Henry Joseph Samiri) into pitching in since that’s a strategy he’s used in the past. He could make Valentine’s Day a family affair.

On the other hand, this would be a great opportunity to go all in with Zoe and prove his “commitment.” Could Thomas propose and try to show Hope he’s truly moved on?

Thomas hasn’t really let go, but he’s determined to make Hope believe he’s no longer obsessed. The Bold and the Beautiful spoilers say Thomas will do whatever it takes to pull off his plot.

Thomas might think Valentine’s Day is the perfect time to pop the question. That way he can get by the idea of it being spontaneous and in the spirit of the holiday.

No matter what tactic Thomas settles on, Valentine’s Day should be an eventful one if he follows his typical pattern. B&B could be gearing up for a shocker or two.