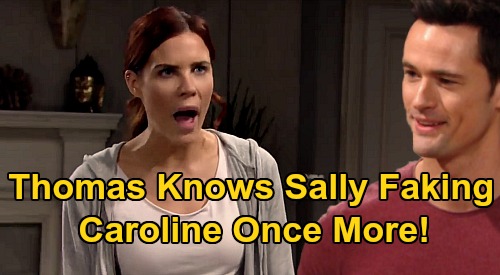 The Bold and the Beautiful (B&B) spoilers tease that Sally Spectra (Courtney Hope) will try to keep up her latest ruse. B&B fans know Sally’s pretending to be terminally ill as part of her plan to make Wyatt Spencer (Darin Brooks) love her again. So far, Wyatt’s fallen hook, line and sinker for Sally’s elaborate scheme.

Katie Logan (Heather Tom) and Flo Fulton (Katrina Bowden) have also been fooled, although Flo will soon be hot on Sally’s trail. The Bold and the Beautiful spoilers say Sally will keep trying to sell this bogus story, but Flo will grow increasingly suspicious as time goes on.

However, perhaps Flo isn’t the biggest threat here. Flo will demand answers from Dr. Penny Escobar (Monica Ruiz) during the week of March 30-April 3, but maybe Sally can keep her in line. It’d be pretty lackluster for Penny to admit the truth so soon, not to mention way too predictable.

Instead, Sally’s plot may come undone due to an unexpected key player – someone Sally never imagined could derail her mission. Sally has duped Wyatt, Flo, Katie, Bill Spencer (Don Diamont), Ridge Forrester (Thorsten Kaye) and Steffy Forrester (Jacqueline MacInnes Wood), but there’s one person who may see right through her strategy. Will Thomas Forrester (Matthew Atkinson) realize it’s all a scam?

Thomas is a master manipulator and has dated Sally in the past. He knows how Sally’s mind operates and can pick up on anything unusual in her behavior. Plus, Caroline Spencer (Linsey Godfrey) once tricked Thomas into believing she had a terminal illness as well. Thomas was essentially in the same position Wyatt’s in, so he may suspect that’s where Sally got the idea.

B&B spoilers say the news of Sally’s deadly fate will start to spread soon. It surely won’t be long until Thomas gets updates and pays “dying” Sally a visit. Thomas has been fixated on Hope Logan (Annika Noelle) for quite a while now, but he’s always going to care about Sally as his ex.

Of course, Thomas may immediately sense that something’s off. Again, Thomas wrote the book on manipulation. It might be downright impossible to convince Thomas that Sally’s truly dying – especially since he’s been down this road with Caroline before.

Thomas can’t be fooled again! He knows all the warning signs. Thomas may call Sally out for faking her terminal illness and push for a confession.

Once Sally’s on the hot seat, she might come clean and beg Thomas to keep this info to himself. Sally may think Thomas owes her that much after burning her repeatedly. Thomas is an awfully devious guy though, so it’d be interesting to see exactly what he’d do next.