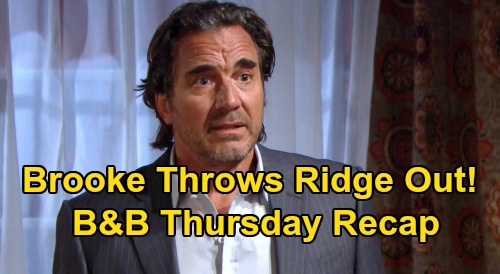 The Bold and the Beautiful spoilers recap for Thursday, August 13, reveal that Shauna Fulton Forrester (Denise Richards) and Quinn Forrester (Rena Sofer) continued to talk over champagne at the Forrester mansion.

Shauna lamented that Ridge Forrester (Thorsten Kaye) hasn’t moved on from Brooke Logan (Katherine Kelly Lang) yet. Quinn thought that Shauna shouldn’t be so stressed, and that Ridge would eventually come to see that Shauna saved him from a life of misery with Brooke.

Quinn asserted that Ridge knew what he was doing, but Shauna fired back that he didn’t know everything. Shauna flashed back to the evening starting at her place in Vegas.

During the flashback, viewers saw that Quinn and Shauna talked via phone that night while Ridge was freshening up in the other room, and that Quinn told Shauna to take Ridge’s phone and text Carter Walton (Lawrence Saint-Victor) to file the divorce papers.

Shauna also flashed back to the actual wedding ceremony, and it turned out that she knew the owner of the wedding chapel and convinced him to perform the ceremony even though Ridge was clearly drunk and stumbling.

Shauna told Quinn that she was concerned about how it all happened, but that she was happy about the marriage.

Quinn asked if Shauna and Ridge had consummated the marriage, but Shauna said that as soon as they got back to her place after the ceremony, the Forrester pilot barged in and took Ridge out of there and that she couldn’t stop it from happening.

Quinn thought it was still ok, and that Ridge and Shauna would have a lifetime to make memories…and that no one would know what really happened.

Meanwhile, at Brooke’s place, Brooke couldn’t fathom that Ridge would marry Shauna. Ridge said that he didn’t remember any of it, but that he just found out from Shauna a little while ago.

Brooke thought that Ridge shouldn’t take Shauna’s word for it, and Ridge said that there was a marriage certificate and photos of them at the chapel.

Brooke paced and couldn’t imagine how this could be happening. “I warned you about her,” Brooke fumed, “And she dragged you to a cheesy wedding chapel.”

Brooke said that Ridge and Shauna couldn’t be married because the divorce papers were never filed, and Ridge miserably told Brooke that he apparently instructed Carter to file the papers before he and Shauna went to the chapel.

Brooke was mortified and she wanted to know if this is what Ridge wanted all along. Ridge said that it was just paperwork, but Brooke was peeved, and she said that Ridge had betrayed their love and what they mean to each other.

“You married someone else! A woman that I warned you about!” Brooke railed. Brooke told Ridge to get out, and Ridge left as Brooke sobbed alone on the bed.

Over at Forrester Creations, Hope Spencer (Annika Noelle) and Zoe Buckingham (Kiara Barnes) continued to chat about their work on Hope For The Future. Hope suggested that they just move forward and that they’d be a good team.

Zoe said that they were a good team when they took down Thomas Forrester (Matthew Atkinson), and Hope mentioned that so far, her co-parenting efforts with Thomas were going pretty well.

Zoe presented Hope with a list of names that Hope For The Future could partner with, and Hope thought it was impressive. Hope shared that she wanted to develop a Hope For The Future scholarship and Zoe loved the idea, saying it would work well with their entire campaign.

Zoe agreed to coordinate with Katie Logan (Heather Tom) on the scholarship asap.

Finally, over in the CEO office. Eric Forrester (John McCook) told Donna Logan (Jennifer Gareis) all about how Ridge had divorced Brooke and married Shauna.

That was a terrific episode of B&B, and there’s plenty more coming tomorrow, so don’t miss it! Stick with the CBS soap and remember to keep CDL bookmarked so you don’t miss any of the latest spoilers, exciting soap news, and daily B&B episode recaps. We’ve got you covered!