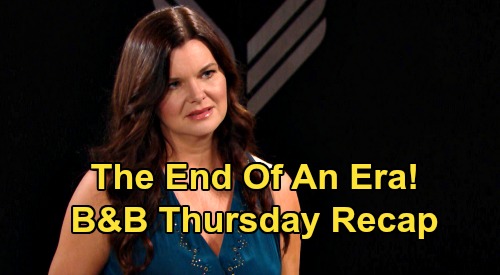 Bill balked, saying that Quinn didn’t know that, and that Ridge was supposedly going to present Shauna with annulment papers tonight, at least according to Brooke Logan (Katherine Kelly Lang).

Together, Bill and Quinn figured that something must have gone south between Ridge and Brooke after Bill left Brooke’s place. Bill told Quinn what Brooke had admitted to loving him, and Quinn wondered if perhaps Ridge had somehow overheard this.

Bill thought that Ridge would have gone ballistic if he had been on the scene, plus, Bill didn’t think that Ridge was the eavesdropping type.

Just then, Katie Logan (Heather Tom) walked up to the open office door, and she overheard Quinn talking about how Bill had pronounced his undying love for Brooke.

Katie walked in the office, and Quinn made herself scarce. Bill was happy to see Katie, but Katie immediately said, “You told my sister that you love her?” Bill admitted that he had.

Katie then said that she had come to the office to see if they could move forward and put their family back together, and that she had missed Bill. Bill said that he felt terribly that he hurt Katie. “Yet you do it over and over again,” Katie said.

At the Forrester mansion, Brooke stood in the doorway of Ridge’s room asking what was going on here. “I forgave you, and we were going to move on with our lives, and now this?” Brooke said in total disbelief.

Ridge asked Shauna for a moment alone with Brooke, and Shauna went downstairs. Brooke indignantly demanded to know why she found Shauna in Ridge’s bed.

Ridge said, “You told me you have no feelings for Spencer.” Brooke then said that she didn’t, but Ridge said, “I heard you.” Brooke said, “Heard what?” Ridge explained that he had been in Brooke’s house during her conversation with Bill.

Brooke said that Bill just came over and that she didn’t invite him over. Brooke insisted that she wasn’t responsible for Bill’s feelings.

“But you are responsible for the words coming out of your mouth,” Ridge said. Brooke asked what Ridge meant, and Ridge said that he heard what Brooke had said to Bill.

Meanwhile, down in the living room, Quinn arrived home and wondered why Shauna was sitting alone. Shauna told Quinn that Ridge was upstairs with Brooke, and that Brooke had barged in while Shauna was on Ridge’s bed.

Quinn thought that was fantastic, but Shauna lamented that this isn’t how she wanted the evening to go, and that none of this could be easy on Ridge.

Back upstairs, Ridge blasted Brooke for telling Bill that she loved him – that she’d always love him. “I never said that,” Brooke lied. “Yes, you did,” Ridge insisted. Finally, Brooke admitted that maybe she said something like that, but that it was just an “expression.”

Brooke said that’s all it was, and that Ridge had to believe her. Brooke apologized for Ridge being hurt by what she said to Bill, and she insisted that this wasn’t the end for them. Ridge just started at Brooke, looking incredulous.

That was a terrific episode of B&B, and there’s much more coming tomorrow. Stay tuned to the CBS soap so you don’t miss the exciting action tomorrow! We’ll be sure to keep you up to speed on the latest B&B news, and we’ll keep you current on the latest spoilers, too. You can count on us!