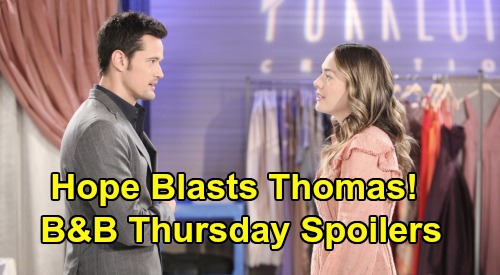 The Bold and the Beautiful spoilers for Thursday, February 13, tease that Thomas Forrester (Matthew Atkinson) will get an earful from Hope Logan (Annika Noelle). As B&B viewers know, Thomas threw Zoe Buckingham (Kiara Barnes) a surprise birthday party at Forrester Creations, during which he made sure that Hope and Douglas Forrester (Henry Joseph Samiri) saw him canoodling with and kissing Zoe.

That prompted some serious discomfort for Douglas, who then asked Hope whether he was going to lose Hope and get Zoe as his new mommy. Douglas was scared and told Hope that he didn’t want to lose her. Well, on Thursday’s B&B episode, Hope will confront Thomas about hurting Douglas and basically ambushing him with a big public display of affection with Zoe.

But it seems that Thomas will have a plan, and he’ll have anticipated Hope’s reaction. In fact, he was banking on the fact that Douglas would have an adverse reaction to seeing him with Zoe, and that Hope would step in and get concerned about Douglas. Thomas knows that Hope always wants to put the children first, and so it looks like she’ll blast Thomas for hurting Douglas and catching him off guard.

However, Thomas will promptly turn the tables on Hope. He might point out that he’s just going what she’s wanted him to do all along – to find someone else and end his obsession with her. He might also point out that she’s just as free as he is to be with someone new, and that he’d never stand in her way of happiness.

He might also remind Hope that what Douglas really wants – for his mommy and daddy to be together – isn’t possible because of her, so really the blame her for hurting Douglas should be on her. That argument, although a bit convoluted, would probably stop Hope dead in her tracks and it could even get her thinking about what could be if she and Thomas were actually together.

Meanwhile, on the new episode of B&B on Thursday, February 13, Brooke Forrester (Katherine Kelly Lang) and Ridge Forrester (Thorsten Kaye) will spend some time together. These two just can’t seem to get on the same page, and while they both really want to save their marriage, they can’t even agree on what’s causing the problem between them, which really is the first necessary step toward fixing the problem.

Brooke will most certainly bring up Thomas as the cause and the catalyst for all of the problems they’ve been having. Then she’ll likely bring up Quinn Forrester (Rena Sofer) and Shauna Fulton (Denise Richards) as supporting actors in the whole thing, since she blames them for prolonging her separation from Ridge. Brooke just seems to be unwilling to place any blame on herself or Ridge for their problems – she looks to outside influences and puts the blame there.

And of course, Ridge has a very different opinion on what’s wrong in their marriage. According to him, Brooke’s ongoing animosity toward Thomas is the root cause of their troubles. He wants Brooke to see that Thomas is making honest efforts to move on with his life, but Brooke can see right through Thomas and she just knows that he’s still obsessed with getting together with Hope. Ridge just can’t take it that Brooke refers to Thomas as a psychopath and has such a low opinion of him.

On Thursday’s episode of B&B, it looks like “Bridge” will continue to clash about why they remain apart. Brooke will no doubt rage against Quinn, saying that she unleashed Shauna on Ridge, but Ridge will likely take the blame for his kisses with Shauna. He’ll probably be frustrated that Brooke is (at least in his mind) displacing her anger toward him onto Quinn, and it doesn’t look like the two will be able to reach common ground at all.

One wonders how long this is going to go on before Ridge finally gets fed up and actually files the divorce papers. As B&B viewers know, he’s in possession of the signed papers but he hasn’t filed them yet, and while both Brooke and Ridge are hoping for a reconciliation, it’s hard to imagine them ever getting there at this point.

Thursday’s episode of B&B should be a good one, so be sure to tune in! And be sure to check back with CDL for regular updates and news on The Bold and the Beautiful.