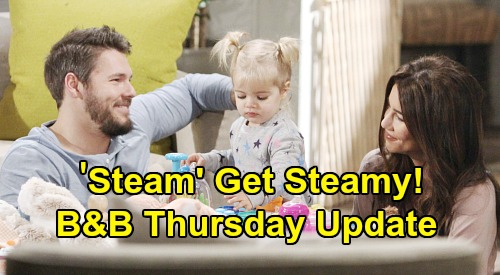 B&B fans know Thomas alerted Steffy to Hope’s arrival, which led to a “Steam” kiss at the worst possible moment. Liam Spencer (Scott Clifton) think it was just an unfortunate twist of fate, but it was actually a plot twisted Thomas came up with! Steffy feels terrible about her role in it, but she may decide this halted confession was for the best.

That’s because Steffy’s about to strengthen her connection with Liam. During family time, Liam will bond with Steffy and Kelly Spencer (Zoe Pennington) – two of his favorite girls in the world.

They’ll all have a blast together, so it’ll all just feel so right to Steffy. Despite her persistent guilt, Steffy will let herself get somewhat swept away. It’ll remind Steffy that her future with Liam is within reach.

Liam will be feeling that same familiar spark, so he’ll share some special scenes with Steffy. Neither one of them will be able to contain the love, so they’ll lean in for another kiss – tender yet passionate.

The Bold and the Beautiful spoilers say they won’t fully unleash their desires, but they’ll take another step toward a full-fledged “Steam” reunion.

Meanwhile, Carter Walton (Lawrence Saint-Victor) will turn on the charm, but he’ll have an ulterior motive. During a chat with Zoe Buckingham (Kiara Barnes), Carter will praise her beauty and leave her quite flattered.

Although Carter will indeed think Zoe’s gorgeous, he’ll use that to segue into what he really wants to know about – which is Zoe’s relationship with Thomas.

Carter may be interested in Zoe romantically, but his concerns will be the priority. He’d hate to see Thomas hurt her, so he’ll question if this relationship is as real as Zoe thinks it is.

Zoe will defend Thomas as a changed man and insist that he’s put Hope behind him. She’ll truly believe that for now, but Carter will offer a warning. He just won’t think Thomas can be trusted, so Zoe needs to be careful.