The Bold and the Beautiful Spoilers: Thursday, January 16 Update – Quinn Fights Back, Brooke Battle Is On – Katie’s Powerful Plea

BY Heather Hughes on January 16, 2020 | Comments: one comment
Related : Soap Opera, Spoiler, Television, The Bold and the Beautiful 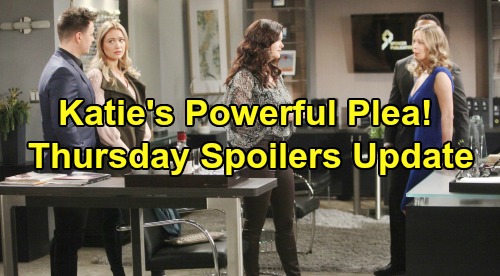 The Bold and the Beautiful (B&B) spoilers update for Thursday, January 16, teases that Quinn Forrester (Rena Sofer) will fume over Brooke Forrester’s (Katherine Kelly Lang) demands. B&B fans know Brooke’s raging over Shauna Fulton’s (Katrina Bowden) kisses with Ridge Forrester (Thorsten Kaye). She feels like an attack on her marriage has been launched – one that Quinn’s in cahoots with Shauna on.

Quinn’s definitely rooting for Shauna to win Ridge’s heart, but that doesn’t mean Brooke can burst in Eric Forrester’s (John McCook) home and tell him who should live there. Brooke wants Quinn and Shauna gone, but Quinn will insist she’s not going anywhere. Of course, Quinn won’t think Shauna should go anywhere either. She’ll rip into Brooke for overstepping, but Brooke will certainly clap back.

The Bold and the Beautiful spoilers say this faceoff will spiral out of control. Brooke will slap Shauna at one point, so that’ll rile Quinn up even more. It won’t be long until Quinn and Brooke have had enough. They’ll declare war on each other, so it sounds like some destructive plots are brewing in the coming episodes.

For now, let’s talk about the meeting Katie Logan (Heather Tom) set up. She’s got a special request in store for her loved ones – and it’s sure to catch them all off guard. B&B fans can expect Katie to make a big speech and deliver a plea for forgiveness. She may reflect on some mistakes she’s made over the years and acknowledge that she was given more chances.

Katie might plead for that same forgiveness when it comes to Flo. Since Flo sacrificed a kidney and saved Katie’s life, Katie may feel obligated to repay her somehow. She’ll likely want Flo to become a true part of the Logan clan again, so we’ll see if she can make it happen.