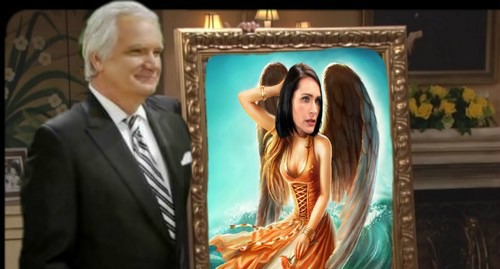 The Bold and the Beautiful spoilers recap for Thursday, July 2, tease that viewers will see an encore episode that originally aired on September 26, 2016. The episode is part of “Love Conquers All Week,” and it’s all about Eric Forrester (John McCook) and Quinn Fuller’s (Rena Sofer) wedding, which no one by Ivy Forrester (Ashleigh Brewer) attended.

At Forrester Creations, the family will be gathered in solidarity, purposely not showing up at Eric and Quinn’s wedding. Zende Dominguez (Rome Flynn) will be feeling guilty about no-showing for the wedding, and he’ll suggest that they’re all being too harsh. Thomas Forrester (Pierson Fodé) will wonder if maybe Eric is ready to talk now.

Wyatt Spencer (Darin Brooks) will offer to call Quinn, but Steffy Forrester (Jacqueline MacInnes Wood) will think the time isn’t right. Thorne Forrester (Winsor Harmon) will be feeling terribly about being a no-show as the best man, but Ridge Forrester (Thorsten Kaye) will say that Thorne needs to stay where he is, and that they all need to remain strong because Quinn cannot be the next Mrs. Eric Forrester.

Meanwhile, over at the Forrester mansion, Ivy will be the only guest in attendance for the wedding. Eric will be horrified that his family has staged this boycott, and Quinn will gently suggest that they not get married today, but Eric will insist that the wedding will go on and that none of this is Quinn’s fault.

Eric will lament that his family knows that they are hurting him by doing this.

Quinn will say that this is all because of her, but Eric won’t let Quinn take the blame for his family’s actions. Eric will say that he’s seen that Quinn has changed – he sees it every day – and that this wedding is going to happen. Eric will ask the officiant to start the ceremony, and with only Ivy as a witness, the nuptials will begin.

Eric will say some personal words, remembering how he and Quinn first met at Forrester and worked together. Eric will promise to make sure going forward that his family treats Quinn fairly. Quinn will speak as well, saying that she’s a changed person now, and that she wants to bring nothing but good for him. In tears, Quinn will promise to stand by Eric always.

After exchanging rings, the officiant will pronounce Eric and Quinn to be husband and wife, and afterwards the string quartet members, Eric, Quinn, and Ivy will enjoy the food and champagne together. Ivy will then leave to allow Eric and Quinn some alone time, and Eric and Quinn will cut the cake together.

Later, Eric will spend a few quiet moments alone looking sadly at the family pictures on the mantel. Quinn will appear, saying that they could have waited, but Eric will say that he’s happy that they didn’t wait. Eric will be upset with his family, and he’ll lament about them not showing and behaving like this on such a special day.

When Quinn leaves to get ready for their wedding night, Eric will look over the power of attorney agreement, and he’ll reminisce about what he told his family about attending the wedding to show the Forrester family’s strength and togetherness.

Quinn will eventually come back downstairs in some lingerie and she and Eric will talk some more, with Eric saying that they’ll start their lives together and be happy.

Eric will then have a big surprise for Quinn when he tells her that he has a special gift for her. Eric will press a button on a remote, which will illuminate the area above the fireplace, revealing a portrait of Quinn wearing white. Quinn will be very surprised but happy with Eric’s gesture.

Meanwhile, back at Forrester, Ivy will arrive and inform everyone that Eric and Quinn got married, and she’ll blast everyone for not showing up to the nuptials.

Everyone will groan as Ivy states that the wedding took place, and that Eric is the one who insisted that he and Quinn go forward without the family present. Everyone, and Steffy and Ridge in particular, will be in disbelief that Eric really married Quinn.

Thursday’s episode of B&B sounds terrific, so be sure to stay tuned! We’ll give you updates as more B&B news comes in. Remember to keep CDL at the ready so you don’t miss any of the latest Bold and the Beautiful news or spoilers.