BY hellodrdavis on March 19, 2020 | Comments: 2 comments
Related : Soap Opera, Spoiler, Television, The Bold and the Beautiful 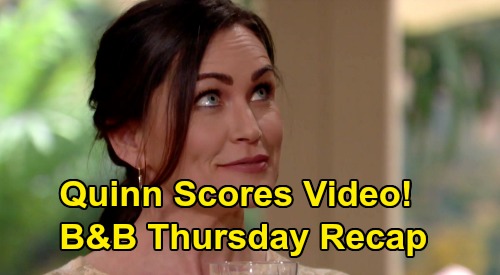 The Bold and the Beautiful spoilers recap for Thursday, March 19, reveal that Shauna Fulton (Denise Richards) and Quinn Forrester (Rena Sofer) watched Shauna’s video of Brooke Forrester (Katherine Kelly Lang) and Bill Spencer’s (Don Diamont) kiss. Quinn excitedly wondered why Brooke would take this kind of risk now, and she noted that Brooke’s sister and Bill have a son together. Shauna lamented that she didn’t know what to do with the video.

Quinn said that she should keep it and show it to Ridge Forrester (Thorsten Kaye) – that this was her opportunity to take Brooke down and end “Bridge’s” marriage for good. Shauna then explained why she was at Brooke’s estate that night – she went to tell Brooke that she didn’t have to worry about her anymore, then wandered down to the cabin and saw the kiss.

But Shauna went on to say that she didn’t want to be “that person” who ruined a marriage, and that there was no way she was going to let Ridge see the video. Quinn did her best to persuade Shauna to reconsider, saying that if Shauna wanted to land Ridge, this was her chance. Shauna refused.

Quinn asked to see the video one more time, during which she secretly emailed it to herself while Shauna was pouring a drink. Shauna then reclaimed her phone and deleted the video permanently. Later, after Shauna had gone, Quinn looked at the copy of the video on her phone, pleased with what she had done.

Meanwhile, at the Forrester CEO office, Katie Logan (Heather Tom) talked with Brooke, telling her that she looked happy and content. She surmised that Brooke must feel vindicated about Thomas Forrester (Matthew Atkinson). Brooke noted that Thomas wasn’t the only one trying to drive a wedge between her and Ridge – Quinn and Shauna did, too.

The sisters then enjoyed a nice moment together, and Brooke told Katie that she was happy that things were going so well between her and Bill. Brooke thanked Katie for all her support, and Katie said that Brooke could talk to her about anything. After Katie left, Brooke sat alone and flashed back to her kiss with Bill.

Next, at Wyatt Spencer’s (Darin Brooks) beach house, Sally Spectra (Courtney Hope) decided to stay home while Wyatt went in to work. Once at Spencer Publications, Wyatt welcomed a visit from Flo Fulton (Katrina Bowden). Flo hugged Wyatt, then asked how Sally was doing. Wyatt lamented about how Sally still hadn’t told him about her illness.

Wyatt told Flo that Sally’s hands had been shaking earlier this morning and about how she had spilled some orange juice. Wyatt said it was hard because he couldn’t comfort Sally, since he wasn’t supposed to know about her illness. He thanked Flo for all her support, and he said that he was grateful that she was letting him have this time with Sally.

Back at the beach house, Dr. Penny Escobar (Monica Ruiz) showed up, and Sally was immediately hostile, telling her that she shouldn’t be there. Dr. Escobar said that Sally needs to tell everyone the truth, and that this couldn’t go on any longer. She refused to go away, but Sally demanded that she leave now. Sally told Dr. Escobar to stay out of her life, but Dr. Escobar persisted, saying that the truth would come out.

Wyatt then approached the door from the outside and heard the argument. He walked in and Dr. Escobar introduced herself to him. She said that Wyatt deserved to know what was going on with Sally, but Sally cut her off and said that she’d tell Wyatt. Sally hesitated, saying that she didn’t want to do this and wreck what they had, but that he needed to know the truth.

Sally proceeded to say that she has been keeping a horrible secret from Wyatt. “I’m sick,” Sally said. “That’s why Dr. Escobar is here. I’m dying.” Wyatt attempted to feign surprise.

B&B is certainly getting good, so be sure that you stay tuned. Remember that CDL is your source for the latest Bold and the Beautiful recaps and spoilers. And we’ll be sure to keep you up to date on the latest B&B news as well.