BY hellodrdavis on May 13, 2020 | Comments: Leave Comments
Related : Soap Opera, Spoiler, Television, The Bold and the Beautiful 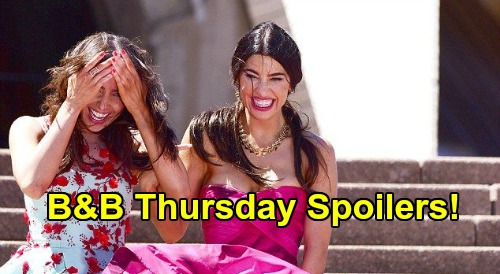 The Bold and the Beautiful spoilers for Thursday, May 14, tease that viewers will see an encore episode that originally aired on March 21, 2017. The episode will begin with Steffy Forrester (Jacqueline MacInnes Wood) and Ivy Forrester (Ashleigh Brewer) having a photo shoot at the Sydney Opera House. Afterwards, there will be a press conference, and Ivy will remind the press that Steffy’s wedding to Liam Spencer (Scott Clifton) later that day is a private event with no photos allowed.

From there, Steffy will get ready for her wedding, and she’ll praise Ivy for helping her get everything sorted. Ivy will say that she is happy to do it, and that she is ok with being part of Liam’s past while Steffy is his future. Later, Ridge Forrester (Thorsten Kaye) will drop by Steffy’s room, and he and Steffy will share some nice moments together.

Meanwhile, in Thomas Forrester’s (Pierson Fode) hotel room, Sally Spectra (Courtney Hope) will talk with Shirley Spectra (Patrika Darbo) via phone. Shirley will instruct Sally to be sure to get some pictures of the wedding to create some buzz, and she’ll pressure Sally, saying that the future of Spectra fashions is in Sally’s hands. Sally will balk, but Shirley will insist.

Over in Liam’s room, Bill Spencer (Don Diamont) will help Liam get ready for the wedding. Liam will acknowledge that it’s awkward because Brooke Logan (Katherine Kelly Lang) was also getting married today. Bill will say that today is only about Liam and Steffy, and that it was going to be a great day that Liam will never forget.

Thomas and Sally will arrive, which will cause a stir. Liam will not want Sally being there, but Thomas will tell Liam that he was allowed to have a date at the wedding. After some back and forth, Liam will decide that it’s ok, and Sally will stay.

Finally, Ivy will get the festivities started by looking over at the opera house and saying, “Here comes the bride!” Everyone will look around for Steffy, then Thomas will see Steffy gliding through the air. As Steffy zip lines into the wedding area, everyone will watch in awe. Steffy will ultimately land at the aisle, where she’ll be greeted by Ridge.

Sally will discreetly snap a quick photo, and Steffy won’t be happy to see Sally there, but Steffy will quickly get over it and make her way down the aisle with Ridge. The officiant will remark that Steffy made quite an entrance, and he then he’ll start the ceremony.

It sounds like we’re in for a terrific encore episode of B&B, and there’s more in store for the remainder of the week! Stick with the CBS soap and be sure to keep CDL bookmarked so you don’t miss the latest Bold and the Beautiful updates going forward. We’ve got your hot soap news and spoilers right here.