The Bold and the Beautiful Spoilers: Thursday, May 28 – Steffy Keeps Liam Away From Hope – Amber & Beverly Clash Over Rick

BY hellodrdavis on May 27, 2020 | Comments: Leave Comments
Related : Soap Opera, Spoiler, Television, The Bold and the Beautiful 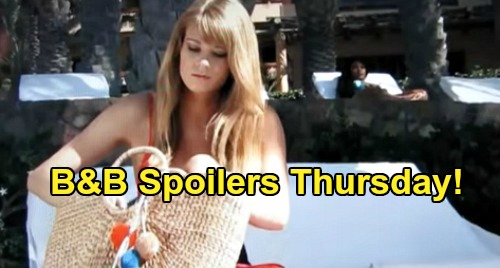 The Bold and the Beautiful (B&B) spoilers for Thursday, May 28, tease that viewers will see an encore episode that originally aired on December 28, 2011. Hope Logan (Kim Matula) will be by the pool in Cabo San Lucas, and she’ll just miss seeing Liam Spencer (Scott Clifton) walk by as she takes an incoming call from Rick Forrester (Jacob Young).

Rick will think that Hope shouldn’t have gone to Cabo San Lucas with Thomas Forrester (Adam Gregory), and he’ll note that Steffy Forrester Spencer (Jacqueline MacInnes Wood) and Liam are inching toward trouble in their marriage. Rick will urge Hope not to get too caught up with Thomas on her trip.

Meanwhile, at Forrester Creations, Amber Moore (Adrienne Frantz) will talk with Beverly the intern (Gina Rodriguez), warning her to keep her hands off of rick. Beverly will brush off the warning as a joke, but Amber won’t be playing around. Beverly won’t seem threatened.

Soon, Rick will walk in and be happy to see Amber. Amber will want Beverly to go, but Beverly will hang around to Amber’s dismay. In the course of their conversation, Rick will sing Amber’s praises as a designer to Beverly, then he’ll suggest that Amber mentor Beverly, since Beverly seems to have the drive to be a successful designer herself.

Amber won’t be happy about this, and she’ll remark that perhaps Beverly’s internship will be over soon, but Beverly will pipe up and say that she plans to stay at Forrester Creations for as long as she’s needed.

Soon, Amber will leave, remarking to Rick that they should do something fun this weekend. After Amber goes, Beverly will nearly be unable to hide her surprise that Rick and Amber are an item.

Rick will open up to Beverly a bit, revealing that Amber had been his babysitter back in the day. Beverly will be surprised, and Rick will reveal that he doesn’t talk about his past or about Amber with anyone. Beverly will be glad that he chose to share at least some details with her.

Back at the resort in Cabo San Lucas, Steffy will try hard to keep Liam from noticing Hope and Thomas. Steffy will be donned in dark sunglasses and a big hat so that she’s not easily recognized, and Liam will wonder why.

Steffy will lie and say that she doesn’t want to get wrinkles. Steffy will spot Hope and Thomas, then pretend to drop her ring to create a distraction so that Liam doesn’t see them.

Thomas will also try to distract Hope so that she doesn’t see Steffy and Liam at the resort. Thomas will even cover Hope’s head with a towel at one point while they’re watching a video together, in order to prevent her from seeing Steffy and Liam.

Meanwhile, Steffy will make a big deal to Liam about how she was unable to get spa appointments for them, and she’ll suggest that they go somewhere else, even to another resort. Liam, however, will want to stay, which will thwart Steffy’s plan to get Liam out of Hope’s orbit.

Liam will be hungry, so Steffy will go upstairs to the room to change, while Liam heads to the restaurant ahead of Steffy. While waiting, Liam will peruse a magazine and see an old advertisement with himself and Hope in it. Liam will flash back to kissing Hope, then he’ll go ahead and order some food, as Steffy will still be up in their room.

Steffy will take the opportunity while she’s alone to talk with Thomas, telling him that Liam refused to leave the resort, and Thomas will report that he and Hope don’t seem to be getting any closer. Steffy will want Thomas to put the moves on Hope, but Thomas will refuse to manipulate Hope or do any scheming.

Steffy will say that before the end of their trip, she’ll have Thomas engaged to Hope, and she’ll brush off concerns that she’s insecure in her marriage to Liam.

Steffy will say that there’s a connection between Hope and Liam still that needs to be squashed. Steffy and Thomas will decide to remain on opposite sides of the resort from here on out. Steffy will then get a text from Liam, and she’ll tell Thomas that she needs to get back to her husband.

Thursday’s encore episode of B&B sounds great, so be sure to stay tuned to the CBS soap! Here at CDL, we’ve got all of your Bold and the Beautiful news and spoilers, so stick with us!