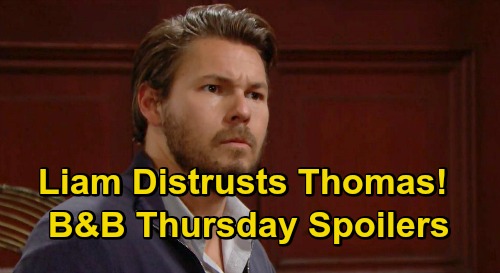 The Bold and the Beautiful spoilers for Thursday, October 22, tease that Hope Spencer (Annika Noelle) and Liam Spencer (Scott Clifton) will continue their conversation at Forrester Creations. As B&B viewers know, Hope has just stated that it seems that even Thomas Forrester (Matthew Atkinson) has come around and dropped his obsessive tendencies toward her.

It looks like that’s going to prompt Liam to make a confession about Thomas and Thomas’ relationship with Hope.

According to B&B spoilers, Liam will turn the tables a bit on Hope, so perhaps he’ll confront Hope with the fact that he doesn’t trust Thomas to be an ongoing part of her life without keeping a serious eye on him.

Liam had a major reaction on Wednesday’s episode when Steffy Forrester (Jacqueline MacInnes Wood) revealed that she thought that Thomas was “coming around” where Hope and Liam were concerned.

Perhaps Liam will tell Hope that he doesn’t feel entirely comfortable with how Hope is letting her guard down with Thomas.

Liam may have been willing to drop his overprotectiveness where Steffy and John “Finn” Finnegan (Tanner Novlan) were concerned, but he’s probably going to tell Hope that he’s not willing to just let go of the animosity that he feels toward Thomas.

Of course, after seeing the end of Wednesday’s B&B episode, viewers know that Liam would be 100% right to continue to worry about Thomas, since Thomas had a mannequin of Hope’s likeness sent to Forrester Creations for him.

In a seriously creepy move, Thomas took the mannequin home with him, and he’ll probably use the mannequin as a muse for his designs.

B&B spoilers for later in the week say that Brooke Forrester (Katherine Kelly Lang) will end up being unnerved when she sees the designs that Thomas has been working on for Hope For The Future.

Something tells us that the designs might include a likeness of Hope as the model, which would definitely continue the creepiness on Thomas’ part.

Meanwhile, on the new episode of B&B on Thursday, October 22, Carter Walton (Lawrence Saint-Victor) will have a thoroughly romantic evening planned for Zoe Buckingham (Kiara Barnes).

As B&B viewers know, Carter was telling Charlie Webber (Dick Christie) all about the big night he’s got planned for himself and Zoe. It looks like Carter wants to take his relationship with Zoe to the next level, so he’ll go all out.

B&B spoilers for this week say that Carter and Zoe will end up making love, so it looks like the evening will take a big romantic turn. The whole thing will probably leave Zoe more conflicted than ever, since it’s clear that she’s also developing feelings for Zende Forrester Dominguez (Delon de Metz).

Something tells us that Zoe’s going to be feeling some seriously mixed feelings about her evening with Carter, especially after Zende inevitably finds out about it.

It sounds like a lot of B&B drama is heating up for Thursday’s episode, so stay tuned! Keep checking back with CDL, and we’ll keep you up to speed on all the latest Bold and the Beautiful spoilers, daily episode recaps, and news.