The Bold and the Beautiful Spoilers: Thursday, October 22 Recap – Hope Doll and Thomas Have an Upsetting Conversation 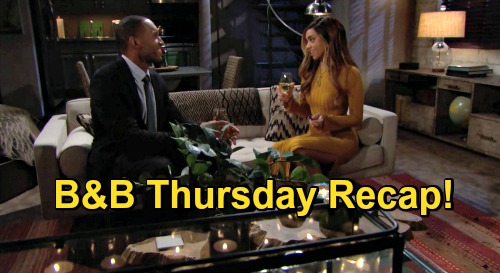 Hope was happy that Liam liked including Douglas Forrester (Henry Joseph Samiri) in their plans, and she credited Thomas Forrester (Matthew Atkinson) for allowing Douglas to be a part of their family. Liam said that he still got creeped out just thinking about Thomas.

Hope noted that Thomas has seemed a little better lately, and Liam thought that Hope was very forgiving. Hope said that she hadn’t forgiven Thomas, but that it felt unfair to Douglas to totally give up faith on Thomas.

Liam thought they should both stay vigilant when it came to Thomas, and Hope said that she and Thomas only had a professional relationship. Liam said that it appeared that Thomas had given up on trying to find ways of having Hope to himself.

At Vinny Walker’s (Joe LoCicero) apartment, Thomas gazed at the mannequin of Hope. “So lifelike,” Thomas mused. Then Thomas sort of snapped out of it and asked himself what he was doing.

“It’s a piece of plastic, this is ridiculous,” Thomas told himself. “I need to get this back to Forrester.” But when Thomas went to put the mannequin back in the box, he imagined the mannequin was actually talking to him.

“Thomas, I don’t want to go back in the box. I want to stay here with you,” the mannequin said. Thomas told himself that he was hearing things, and that it wasn’t real. Thomas approached the mannequin and it said, “Please don’t lock me up in that box again.”

Thomas was genuinely concerned and looked on and around the mannequin to see if there was some sort of sound system on it.

In the Forrester Creations design office, Zende Forrester Dominguez (Delon de Metz) talked with Zoe Buckingham (Kiara Barnes) about the possibility of her moving in with Carter Walton (Lawrence Saint-Victor).

Zoe wanted Zende’s advice on the matter, but Zende said that only she could answer. Carter then walked in and asked if he was interrupting something.

Zoe and Zende said no, and Zende congratulated Carter on his new loft. Carter indicated that he had a special evening planned for himself and Zoe. Zende joked about whether he could join, and Carter smiled and said no.

Carter and Zoe took off, and a bit later they walked into Carter’s loft together. Carter and Zoe happily talked about how they were lucky to have each other, and Zoe really seemed happy with Carter.

Later, Zoe and Carter drank chardonnay together, and Carter revealed that he had hired a private chef to cook them dinner. Zoe was impressed. Carter said that he wanted Zoe to feel at home there, and that he wanted to treat her as she deserved to be treated.

Zoe said that Carter made her feel very important, and Carter said that he cared about being by Zoe’s side and that he saw good things for them going forward. Zoe and Carter happily kissed.

Back in the Forrester CEO office, Zende walked in to find Hope and Liam still there talking. Liam was thrilled to see Zende again, and quickly the subject of Thomas came up.

Zende thought that Thomas can be good at hiding things, and he supposed that Thomas wished that he had stayed in Paris. Liam advised Zende that Thomas was delusional and incapable of change, especially where Hope was concerned.

Back at Vinny’s apartment, Thomas told the Hope mannequin that she was just a mannequin. “No, I’m not,” the mannequin said. Thomas got upset and started pacing, clearly upset with what was happening to him.

The mannequin said, “Please, Thomas, this is what we’ve been waiting for. Take me back tomorrow. I want to be with you. I know you want that, too.” Thomas reeled, wondering what was wrong with him.

Stay tuned to the CBS soap – you won’t want to miss what’s coming up tomorrow! We’ll be sure to give you updates as more B&B news comes in. Remember to keep CDL at the ready for all the latest Bold and the Beautiful spoilers, daily episode recaps, and news.