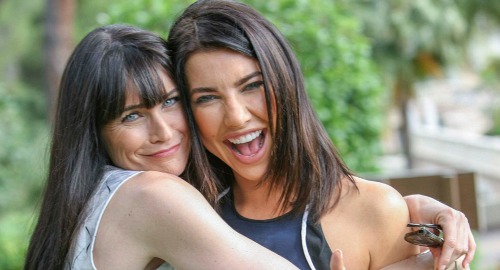 The Bold and the Beautiful spoilers for Tuesday, April 28, tease that viewers of the CBS soap will see Part 2 of the documentary, “Becoming Bold & Beautiful.” If you were fortunate enough to watch Part 1 of the documentary on Monday, April 27th, then you were in for a treat, and the action will continue right where it left off on Monday.

The documentary was shot back in 2016 during a remote location shoot in Monte Carlo, and so far viewers have seen some behind-the-scenes footage of how several scenes were shot, including some shots of Wyatt Spencer (Darin Brooks) reacting to Steffy Forrester’s (Jacqueline MacInnes Wood) fashion shoot aboard the Stella Maris.

Well, on Part 2 of the documentary on Tuesday, April 28th, viewers will get an up-close-and-personal look at the big chase scene between Steffy and Quinn Fuller (Rena Sofer).

Viewers who were watching back in 2016 will remember that Quinn followed Eric Forrester (John McCook) to Monte Carlo for the Spencer Summit, but then Steffy got curious about who Eric’s new woman was.

Steffy and Quinn were not getting along at the time, as Quinn was Steffy’s mother-in-law. Steffy was married to Wyatt Spencer (Darin Brooks), and she didn’t want Quinn anywhere near her grandfather. Well, it looks like viewers will get to see how the big reveal scene was shot – the scene where Steffy chased down Quinn and slapped her.

Jacqueline MacInnes Wood is shown laughing about the big slap scene, joking that Quinn wanted it, and that it was a real slap. Viewers will also see how filming was halted due to what appears to be a parade or a protest march by where the crew is filming, and by heavy rain, which was ultimately incorporated into the show.

We’ll see what other surprises are in store for Part 2 of the “Becoming Bold & Beautiful” documentary. You won’t want to miss it, and it will also be interesting to see which cast member or members introduce Part 2 of the show.

For Monday’s show, Jacqueline MacInnes Wood and Scott Clifton briefly previewed the show from their respective homes while they were in quarantine. Who will we see tomorrow?

And on Friday, May 1, 2020, an encore episode will air, although CBS has not yet announced which episode this will be. We’ll be sure to keep you in the loop, so you know what’s coming! Enjoy tomorrow’s Part 2 of the “Becoming Bold & Beautiful” documentary! Stick with the CBS soap and keep CDL bookmarked for all your B&B updates!