The Bold and the Beautiful Spoilers: Tuesday, February 25 – Wyatt & Flo Make The Ultimate Sacrifice – Katie’s Mission To Save Sally’s Job

BY hellodrdavis on February 24, 2020 | Comments: 2 comments
Related : Soap Opera, Spoiler, Television, The Bold and the Beautiful 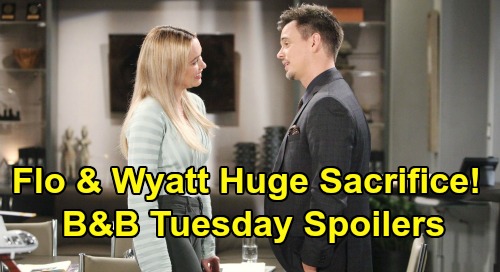 The Bold and the Beautiful spoilers for Tuesday, February 25, tease that Wyatt Spencer (Darin Brooks) will have Sally Spectra (Courtney Hope) on his mind. As B&B viewers know, he feels awful about Sally’s terminal condition, and he wants to help her in any way that he can. But it’s a tricky situation, since she doesn’t know that he knows about her diagnosis. It’s not like he can just walk up to her and pledge to be there for her until the end.

So, on Tuesday’s episode, he and Flo Fulton (Katrina Bowden) will regroup and try to figure out a way to help Sally in her time of need. They both know that Sally doesn’t want anyone to know about her condition, so they’ll have to work around that. According to B&B spoilers, even though it will be a sacrifice for them, they’ll decide that Wyatt needs to be with Sally during the final weeks of her life.

Of course, that means that Flo will need to step aside for the time being, but it seems that she’ll be willing to do so, for Sally’s sake. She won’t want Sally to go through this time alone, and she’ll be pretty sure that Sally will tell Wyatt about her condition in time. But for the time being, she and Wyatt will want Sally to think that Wyatt has come back to her without knowing about her diagnosis.

It looks like Wyatt and Flo will nail down all the components of their plan on Tuesday’s episode, which should involve making it seems like they’ve gone their separate ways and that Wyatt has willingly chosen to return to Sally. Of course, there will be a couple other people who will be in on the plan as well, including Katie Logan (Heather Tom) and Bill Spencer (Don Diamont), since they know about Sally’s illness as well.

Meanwhile, on the new episode of B&B on Tuesday, February 25, Katie will take some steps to help save Sally’s position at Forrester Creations. According to B&B spoilers, Katie will secretly reveal Sally’s diagnosis to both Ridge Forrester (Thorsten Kaye) and Steffy Forrester (Jacqueline MacInnes Wood). Of course, both Steffy and Ridge have noticed that something’s been off with Sally lately, and Katie will fill them in on what’s been going on.

Katie will likely note to Ridge and Steffy that Sally has virtually nothing left but her job at this point, and that they could do something really wonderful for Sally if they allowed her to keep her position for as long as she’s able to work. Ongoing B&B spoilers say that after some thought, Ridge and Steffy will devise a plan of their own to do something special for Sally.

As B&B viewers know, Sally has been virtually unable to design due to her illness, and the designs that she has produced haven’t been great – in fact, previously Ridge criticized them pretty harshly and said that they weren’t of proper quality to be Forrester designs. Well, it seems that he and Steffy will decide to retool her designs a bit and make them useable while still preserving the essence of what it seemed Sally had in mind for them.

This should all please Katie, who will be on a mission to at least make Sally’s work life go smoothly. That, in combination with the plan that Wyatt and Flo are about to set into motion for Sally, should lead to some good news for her as the week progresses. It looks like by week’s end she’ll have a couple parts of her life back on track for now, which should be of some comfort to her.

Tuesday’s episode of B&B sounds great, so don’t miss it! We’ll be sure to give you updates as more B&B news comes in. And don’t forget to check back with CDL for all of your latest Bold and the Beautiful recaps, spoilers, and news.