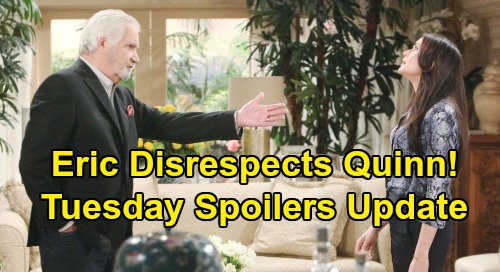 The Bold and the Beautiful (B&B) spoilers update for Tuesday, January 28, teases that Thomas Forrester (Matthew Atkinson) will halt Steffy Forrester’s (Jacqueline MacInnes Wood) confession. B&B fans know Steffy’s guilt is starting to take a toll. She blames herself for Liam Spencer’s (Scott Clifton) split from Hope Logan (Annika Noelle), and she’s about to tell him why.

Of course, Thomas has no intention of letting Steffy spill the beans. He pushed Steffy into her kiss with Liam and alerted her to when Hope would see it, but he doesn’t want any of that to get out. That could destroy Thomas’ shot at winning Hope over. We all know Liam would run off and tattle to Hope the first chance he got.

Furthermore, this could derail Liam and Steffy’s reunion, which Thomas is convinced will help him. He’ll find a way to disrupt Steffy’s confession on Tuesday, but he’ll have to stay on top of the situation.

Steffy’s guilt isn’t going away, so Thomas will need to remind her of what she stands to gain. He’ll promise Steffy all her “Steam” family dreams will come true if she just keeps quiet.

She won’t believe Brooke Forrester (Katherine Kelly Lang) has a right to tell Eric who can and can’t live in his guesthouse.

Eric will understand that Shauna is Quinn’s friend, but he’ll want to put Ridge Forrester (Thorsten Kaye) first. He’ll think they have a responsibility to watch out for Ridge’s marriage, but Quinn will think that’s ridiculous.

It’s not their job to decide who Ridge kisses – and it’s not Brooke’s place to barge in their home barking orders.

B&B spoilers say Quinn will feel completely disrespected. She’ll remind Eric that Brooke told him to end his marriage, so she won’t see why Eric should cave into any demands. If you give Brooke an inch, she’ll take a mile!

Nevertheless, Eric will choose to put his foot down this time. He’ll insist that Shauna simply must move out.

When Shauna eventually gets updates, she’ll assure Quinn it’s no big deal. Shauna won’t want to cause issues for Quinn and Eric, so she’ll urge Quinn to let it go.

After all, Shauna can move back in with “Flo” Fulton (Katrina Bowden) for now. She’ll point out that maybe after Flo moves in with Wyatt Spencer (Darin Brooks), she can even have the place to herself.

However, it’s the principle of the thing for Quinn. She’ll feel like Brooke’s won this round of battle, but she’ll refuse to let her win the next one! The Bold and the Beautiful spoilers say some hot drama’s ahead, so don’t miss all the action. We’ll keep you posted as other B&B news comes in. Stick with the CBS soap and don’t forget to check CDL often for the latest Bold and the Beautiful spoilers, updates and news.