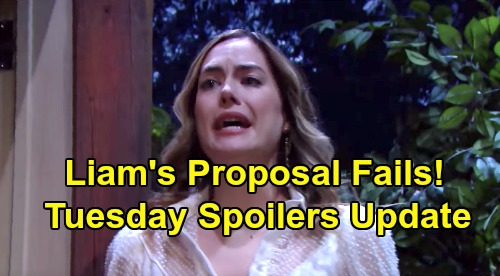 The Bold and the Beautiful (B&B) spoilers update for Tuesday, January 7, teases that Liam Spencer (Scott Clifton) will set a romantic scene for Hope Logan (Annika Noelle). He’ll pull out all the stops with flowers and candles as he prepares to drop a bomb. Liam will know he’s about to demand something massive from Hope, so he’ll want to make sure she feels like his queen first.

Hope will indeed appreciate Liam’s efforts in Tuesday’s episode. Liam will dote on Hope and will say all the right things. He’ll make a powerful speech about his love before he asks Hope to marry him. Unfortunately, their romantic night will turn sour moments later.

Liam’s stunning stipulation isn’t something Hope will approve of at all. He’ll bring up how dangerous Thomas is and insist they need a way to cut ties for good. In Liam’s opinion, the only way to do that will be backing out of the custody agreement.

Hope can walk away from her partnership with Thomas at Forrester Creations, but it isn’t going to matter as long as she’s stuck in Thomas’ co-parenting orbit. Liam will feel like that’s what everything hinges on.

Hope shares legal custody of Douglas Forrester (Henry Joseph Samiri) with Thomas, so Liam will think the only solution is giving that up.

Naturally, B&B spoilers say Hope will be in disbelief over the terms of this engagement. She’ll be shocked that there’s a stipulation at all – particularly one that puts a little boy’s well-being at stake. Hope will beg Liam to forget about this ultimatum.

Hope will hold out hope that she can be Douglas’ legal mother and still rebuild her marriage to Liam.

However, Liam will want to get off the Thomas crazy train. He had concerns from the get-go over this Douglas custody situation and now those concerns are even worse. Liam will insist this is how it has to be, but Hope just won’t be on board.

This will definitely bring some serious “Lope” conflict, which Thomas will ultimately use to his advantage.

In the meantime, Thomas will have to deal with Steffy Forrester’s (Jacqueline MacInnes Wood) questions and complaints. Liam filled Steffy in on Thomas’ death threat, so she’ll want to give him a piece of her mind. She thought Thomas was turning from his wicked ways, but this will certainly damage her faith in him.

The Bold and the Beautiful spoilers say Thomas will brush off his deadly warning and act like Liam’s the one causing drama. He’ll suggest that Liam’s paranoid and will do anything to bring him down.

Thomas may admit he lost his cool, but he’ll think it’s Liam’s fault for pushing his buttons. He’ll try to spin all this around on Liam and hope Steffy buys at least some of what he’s selling.

Of course, Steffy’s bound to remain wary of Thomas and his motives, but she’ll be persuaded to plant a kiss on Liam later this week. The Bold and the Beautiful spoilers say Steffy will let Thomas manipulate her, so even Steffy’s not immune to her brother’s tactics!