The Bold and the Beautiful Spoilers: Tuesday, July 7 Recap – Bridget Shocked To Overhear Deacon Profess His Love For Brooke 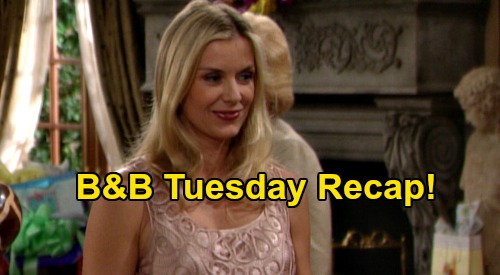 The Bold and the Beautiful spoilers for Tuesday, July 7, tease that viewers will see an encore episode that originally aired on June 14, 2002. The episode is part of “Confrontations Week” and it centers on Bridget Forrester’s (Jennifer Finnegan) big realization that her husband Deacon Sharpe (Sean Kanan) is in love with her mother Brooke Logan (Katherine Kelly Lang). And the truth will come out in the most shocking way.

The shower will be a positive experience for everyone, with attendees saying wonderful things about Brooke and her ability to be a great mom. There will also be a lot of talk about how Brooke is starting over with Whip Jones (Rick Hearst) and moving in a new and positive direction in her life.

Among Brooke’s presents will be a baby monitor from Bridget. Bridget will have taken the liberty of setting up the monitor, so that one monitor is upstairs with the other presents and the other monitor is downstairs.

Elsewhere, Deacon and Whip will have a heated confrontation. Deacon will tell Whip that he knows that Whip and Brooke haven’t slept together, but Whip will insist that it doesn’t matter. Later, once the baby shower is over, Deacon will arrive and talk with Brooke upstairs.

Deacon will go on to Brooke about how she deserves better and how Whip isn’t the right man for her. As Deacon and Brooke are going back and forth about private matters, they won’t realize that the baby monitor is functional and is picking up what they’re saying.

Downstairs, Bridget will be cleaning up after the party when she hears Brooke and Deacon talking through the monitor.

Bridget won’t be particularly alarmed by hearing her husband and her mother talking, but as she’s on her way up the stairs, Bridget will be astonished when she hears Deacon say that Whip will never love Brooke the way that he loves her. Bridget will nearly collapse as she continues to listen and learns all about her mother’s affair with Deacon.

Tuesday’s episode of B&B sounds terrific, so stay tuned! We’ll give you updates as B&B news comes in. Stick with the CBS soap and don’t forget to keep CDL bookmarked for all the latest Bold and the Beautiful spoilers, updates, and news.