BY hellodrdavis on March 9, 2020 | Comments: one comment
Related : Soap Opera, Spoiler, Television, The Bold and the Beautiful 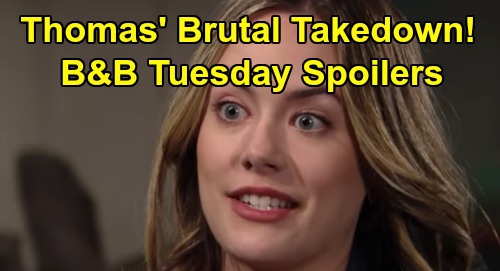 The Bold and the Beautiful spoilers for Tuesday, March 10, tease that Liam Spencer (Scott Clifton) and Hope Logan (Annika Noelle) will revel in their happy news. As B&B viewers know, Liam just asked Hope to marry him and to be a family with him, Beth Spencer (River Davidson and Madeline Valdez), and Douglas Forrester (Henry Joseph Samiri).

This came after Steffy Forrester (Jacqueline MacInnes Wood) told Hope that Thomas Forrester (Matthew Atkinson) was still manipulating in order to be with her.

Well, on Tuesday’s B&B episode, Liam and Hope will share some happy moments between the two of them, and Steffy will feel good about confessing everything about her kiss with Liam to Hope. But then there will be some serious business to get down to, as Liam, Steffy, and Hope will want to make sure that (a) Thomas gets what’s coming to him, and (b) Douglas is kept safe.

So Hope, Liam, and Steffy will sit down and come up with a plan to achieve both ends. It’s likely that viewers won’t be privy to all of the details of the plan, but ongoing B&B spoilers indicate that something huge is going to go down at the wedding of Thomas and Zoe Buckingham (Kiara Barnes).

It looks like Hope and Liam will end up attending the wedding separately, concealing the fact that they know about Thomas’ grand plan and that they’re now engaged.

Exactly what’s going to happen at this wedding remains to be seen, but B&B spoilers are clear that Douglas will have some sort of meltdown and run out of the room.

Hope will follow, likely leading Thomas to think that Douglas may work his magic and beg her to marry his Daddy. And when Hope returns to the wedding, she’ll shock everyone – there’s a good chance she’ll wind up wearing that Hope For The Future showstopper gown and make it seem like she wants to marry Thomas.

From there, things could get interesting. We’ll see what Hope and Liam have up their sleeves, but it looks like the plan is to expose Thomas’ motives for what they really are.

That probably means that Hope will claim to want to marry Thomas, forcing his hand. And when he turns away from Zoe and clings to Hope, then Hope and Liam can nail him right on the spot, in front of everyone. Lope might even tie the knot themselves – B&B buzz is that Hope will marry Liam instead of Thomas!

We’ll see if that’s what Steffy, Hope, and Liam cook up on Tuesday’s episode, and whether they let the audience in on what they’re planning, but we could certainly see it go down that way. It would be a truly spectacular ending to months-long manipulation on Thomas’ part.

Meanwhile, on the new episode of B&B on Tuesday, March 10, Brooke Forrester (Katherine Kelly Lang) and Bill Spencer (Don Diamont) will find themselves in a state of shock.

As B&B viewers know, they were talking about the ongoing situation with Thomas when Bill vowed to always support Brooke. They hugged, then one thing led to another and they shared a passionate kiss.

Well, on Tuesday’s episode, Brooke and Bill will talk about what’s just happened between them. It appears that they’ll agree that they got swept up in a moment, and that they need to keep that smooch to themselves. Brooke will likely indicate that she truly wants her marriage to Ridge Forrester (Thorsten Kaye) to work, and Bill will almost surely say that he loves and is committed to Katie Logan (Heather Tom).

Unfortunately, B&B viewers know that someone saw Bill and Brooke’s kiss through the window of the cabin, so it doesn’t look like it’s going to be so simple. Interestingly, the person who saw the kiss couldn’t have been Thomas, as he was shown back at the Forrester mansion while all this was going on.

Could it be Quinn Forrester (Rena Sofer) who spied the kiss? If so, then Brooke and Bill will surely be in for a surprise, since Quinn will almost certainly blab about what she saw in order to hurt Brooke.

We’ll see what happens here, but given that someone saw that kiss, it doesn’t look like Bill and Brooke will be able to keep a lid on it for long. And that means that it probably won’t be long before Katie and Ridge find out about it.

That will devastate them for sure and will be especially hard on Katie, given that she’s been down this road with Bill cheating on her with Brooke in the past.

We’re looking at a lot of great action on Tuesday’s episode of B&B, so keep on watching the CBS soap! We’ll be sure to pass on more B&B news and updates as we receive them. And don’t forget that CDL is your place for the latest Bold and the Beautiful spoilers, updates, and news.