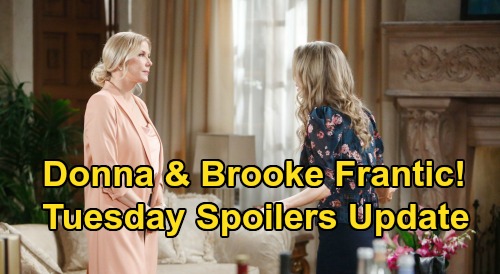 Brooke will be just as horrified when she sees the evidence, but she’ll assure Donna she didn’t mean for this to happen. It was a heat-of-the-moment thing that they put behind them instantly.

That kiss also happened before Brooke and Ridge Forrester (Thorsten Kaye) officially reunited, but they were obviously still married. Donna’s going to have a big problem with Brooke going behind Ridge’s back.

Of course, the fact that Brooke betrayed Katie Logan (Heather Tom) will infuriate Donna even more. Katie’s been through enough as it is! Donna will rant at Brooke and make it clear that this is unacceptable. Now that Donna knows what went down, she’ll hate that she’s in the middle of her sisters’ messy love lives.

However, Donna will ultimately put her feelings about all this on hold. It’ll be time to focus on another pressing issue: getting rid of that video. The Bold and the Beautiful spoilers suggest that’ll be easier said than done, but their efforts won’t matter anyway.

Whether Donna and Brooke succeed or fail, Quinn Forrester’s (Rena Sofer) going to make sure that video goes public at the “Bridge” reunion party.

Meanwhile, Sally Spectra (Courtney Hope) will have to keep her secret scheme going strong. Flo Fulton (Katrina Bowden) grew fearful when she saw Sally sprawled out on the floor, but Sally was just doing a little yoga.

After Sally explains, she’ll probably gripe about Flo showing up. There should be some tension over Wyatt Spencer (Darin Brooks), which will lead to some intriguing clues for Flo.

The Bold and the Beautiful spoilers say Flo will notice something peculiar. Sally’s affection toward Wyatt will seem rather strange to Flo; something about it just won’t feel exactly right. Flo will have questions about Sally’s true intentions, so suspicions will start to bubble up.

It’s doubtful Flo will have any idea that Sally might be faking her terminal illness, but this will be an important first step. Whatever Flo notices should be something that’ll make far more sense down the road.

It sounds like some terrific twists and turns are looming, so we’ll give you updates as other news rolls in. B&B viewers will be eager to watch Sally’s secret unravel. As always, don’t forget to drop by CDL frequently for more Bold and the Beautiful spoilers, news and updates.