BY hellodrdavis on March 2, 2020 | Comments: 2 comments
Related : Soap Opera, Spoiler, Television, The Bold and the Beautiful 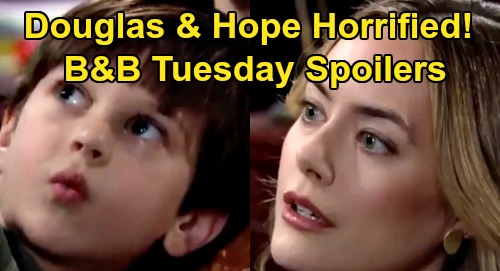 The Bold and the Beautiful spoilers for Tuesday, March 3, tease that Thomas Forrester (Matthew Atkinson) will barrel forward with his plan to get Hope Logan (Annika Noelle) for himself. As B&B viewers know, he’s been deliberately manipulating Douglas Forrester’s (Henry Joseph Samiri) feelings to get to Hope, most recently by proposing to Zoe Buckingham (Kiara Barnes) in front of him. That sparked a mini meltdown on Douglas’ part, which was just what Thomas wanted.

Of course, Thomas’ big agenda is to upset Douglas enough so that he’ll work on Hope, begging her to remarry his Daddy. Thomas is banking on Hope’s maternal instincts to kick in, and for her to decide to be with him again or to declare that they might have a future together down the road.

It’s a really manipulative plan, and clearly Thomas doesn’t mind using his son to get what he wants. Well, on Tuesday’s episode of B&B, Thomas will decide that simply being engaged to Zoe isn’t enough to get the effect he wants out of Douglas, so he’ll decide to accelerate his plan.

According to B&B spoilers, Thomas will announce that he wants to marry Zoe right away, and it looks like he’ll make this “impromptu” announcement in front of Zoe, Douglas, and Hope.

That’s going to cause another big reaction out of Douglas, who will cry out that he doesn’t want that to happen. As Douglas clings to Hope, Hope will reel from the news herself, and she’ll probably have another private talk with Thomas about the effect of his actions on Douglas.

That will allow Thomas to tell Hope again that he’s determined to move on with his life, since it’s clear that she will never want him.

Of course, this is all part of Thomas’ plan to work on Hope and to get her to want to do something to stop this wedding from happening, for Douglas’ sake. What Thomas would really like is for Hope to come to him and say that he needs to put the brakes on his relationship with Zoe for now, because there might be a chance for them someday.

Well, while Thomas is orchestrating all this chaos for Hope and Douglas, it looks like he’ll also be providing his buddy Vinny Walker (Joe LoCicero) some updates on what he’s doing.

Thomas seems to enjoy shocking Vinny with his plans, and it appears that Vinny will be sufficiently galled by what Thomas is cooking up now with his accelerated wedding scheme.

The Bold and the Beautiful spoilers say that Vinny will again call out Thomas for using Douglas and abusing his feelings. He won’t like it that Thomas is using Douglas as a means to an end to get Hope.

It seems that Vinny really cares about Douglas and doesn’t want to see him get hurt. But it doesn’t look like his protests will deter Thomas from his ultimate plan, as B&B spoilers indicate that wedding plans are going to move forward quickly.

Tuesday’s episode sounds great, so be sure to stay tuned! We’ll provide you with updates as more Bold and the Beautiful news comes in. Stick with the CBS soap and don’t forget to check back with CDL for the latest B&B spoilers, news, and recaps.

The wedding planning begins this week on #BoldandBeautiful. 💍 Don’t miss it! pic.twitter.com/JjNuK22HzA