BY hellodrdavis on May 11, 2020 | Comments: Leave Comments
Related : Soap Opera, Spoiler, Television, The Bold and the Beautiful 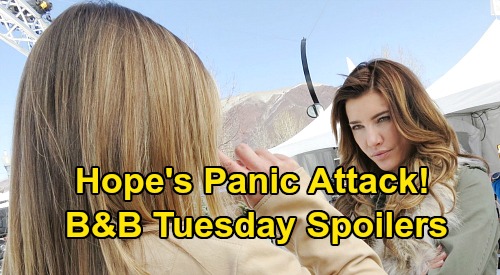 The Bold and the Beautiful spoilers for Tuesday, May 12, tease that viewers will see a episode that originally aired on April 27, 2012. First, at Spencer Publications, Justin Barber (Aaron D. Spears) will question Bill Spencer (Don Diamont) about his plan to “save” Liam Spencer’s (Scott Clifton) future by keeping him from marrying Hope Logan (Kim Matula). Justin will quickly figure out that Bill’s true agenda is to get Steffy Forrester (Jacqueline MacInnes Wood) back into the Spencer family.

Soon, Ramona Bruland (playing herself) will call Bill and say that she’s unsure about Bill’s plans for Hope. Bill will tell Ramona that Hope’s fitness as Liam’s wife needs to be tested, and that Liam will learn a lot from watching how Hope handles the reporters. Bill will remind an uncertain Ramona that she works for him and not for Steffy.

Meanwhile, Rick Forrester (Jacob Young) will talk with Brooke Forrester (Katherine Kelly Lang) at Forrester Creations. Rick will be worried about Hope possibly going to the Aspen fashion show, but Brooke will doubt that Hope will attend.

Rick will express concern about Steffy being in Aspen, although Brooke will think that Steffy has learned her lesson about how Liam feels about schemes.

Brooke will also feel like the press in Aspen won’t focus on Hope, since the fashion show will be its central concern. Rick will concede that it is a big event, and it’s not like the reporters even know that Hope is there.

Brooke will wonder if perhaps someone might tip the press off about Hope being in Aspen, and Rick will say that if the press does find out that Hope is there, it won’t be by accident.

Rick’s fears will escalate as he talks with Brooke, and Brooke will tell Rick that he’s a good big brother to Hope. Rick will be tired of seeing his sister be torn apart, and he’ll note that Liam hasn’t done a good job of protecting Hope so far. Rick will lament that he’s so far away, and he’ll hope that he won’t regret not being in Aspen himself.

Over in Aspen, Hope will insist on leaving the Spencer compound with Liam to enjoy all the festivities of fashion week. Liam will be leery, but Hope will say that she’ll be incognito and will watch everything from afar while Liam works the event.

Hope will be in disguise, but Ramona and Oliver Jones (Zack Conroy) will notice her and Ramona will tell the press.

Ramona will then bump into a sad Steffy in the crowd. Steffy will be watching Liam work, and Ramona will tell Steffy that even though Liam arrived with Hope, it was who he leaves with that really matters. Steffy will then talk with Liam, who won’t really give her the time of day.

Later, Ramona will quip to Steffy that it looks like she and Liam are in love.

Hope will suddenly find herself surrounded by the press and being asked all sorts of questions about her relationship with Liam. Hope will race away from all the attention, but the reporters will follow her.

Othello (Othello R. Clark) will see this go down, and he’ll call Rick to tell him that what is happening and that he’ll get Hope back to Bill’s place. Rick will be beside himself, and he’ll tell Brooke that Steffy might be behind this.

Back in Aspen, Hope will still be trying to dodge the press, but Oliver will tip them off to her location as she keeps moving. Steffy will have realized what’s going on, and she’ll ask Ramona to help her help Hope.

Ramona and Steffy will search for Hope but will be unable to find her. Steffy will explain to Ramona that she doesn’t wish any of this on Hope.

Othello, now driving, will find Hope running down the street, and he’ll urge her to get into his car. Othello and Hope will speed away, with Oliver watching. Oliver will call Bill to let him know what’s happened, and Bill will tell Oliver to send the press to the house to put Hope’s feet to the fire.

Meanwhile, Liam will start to wonder where Hope is, and Oliver will lie and tell Liam that he hasn’t seen Hope. Liam will be puzzled by Hope’s absence. Othello will take Hope back to the Spencer compound, where he’ll leave her alone.

But outside, reporters will be swarming the house, and soon the place will be surrounded. Reporters will start taking flash photos outside Hope’s bedroom windows.

Hope will be terrified, and she’ll quickly try to close the blinds. In doing so, Hope will spill the contents of her toiletry bag, and a bottle of pills will fall to the floor. Hope will start to have signs of a panic attack and she’ll pick up the bottle while the reporters outside the window call her name and flashbulbs go off.

Here at CDL, we’ll continue to give you updates as more B&B news comes in. We’ve got all your soap updates and spoilers!