BY hellodrdavis on May 25, 2020 | Comments: Leave Comments
Related : Soap Opera, Spoiler, Television, The Bold and the Beautiful 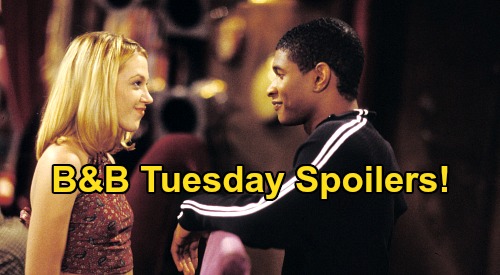 The Bold and the Beautiful spoilers for Tuesday, May 26, tease that viewers will see a throwback episode that originally aired on June 11, 1998. In the episode, which is part of B&B’s “Celebrity Week,” Grammy Award winning recording artist Usher will perform on the show. Usher will appear as a character named “Raymond” who is a childhood friend of Amber Moore’s (Adrienne Frantz).

The action will start at Insomnia, where Macy Alexander (Bobbie Eakes) and Grant Chambers (Charles Grant) will notice how electrified the audience is over Raymond’s performance.

Macy will tell Grant that Raymond is a friend of Amber’s who seems to be the hottest act in town. Meanwhile, Amber will explain to CJ Garrison (Mick Cain) that she went to high school with Raymond before her family moved to Los Angeles.

CJ will find himself feeling jealous, and soon a waitress will approach Amber wanting her to introduce her to Raymond after the show. Amber won’t know if she can do that, and the waitress will jokingly tell Amber that she just wants to keep Raymond all to herself.

That will unnerve CJ, and he’ll get even more unnerved when Raymond dedicates a special song to Amber.

The song will be called “My Way,” and Raymond will get the crowd clapping before he sings the song to Amber, twirling her as he does. CJ won’t like any of this, and he’ll stand there with his arms folded and an unamused look on his face.

After the song, Raymond will wink at Amber, and later a waitress will bring Amber a napkin with Raymond’s phone number and hotel room number written on it.

Meanwhile, Stephanie Forrester (Susan Flannery) will pay Eric Forrester (John McCook) a visit in his office. Eric will be upset with Stephanie after having overheard her tear into Brooke Forrester (Katherine Kelly Lang). Stephanie will want to explain, and she’ll tell Eric that she didn’t intend for her discussion with Brooke to take a turn, but that it had.

Stephanie will say that she was trying to reach out to Brooke in her time of need, but that everything quickly went sideways, and that’s when Eric walked in and overheard what he heard. Eric will be livid, saying that he’s not at all surprised that Stephanie snapped with Brooke. Stephanie will wonder how many mea culpas it will take to satisfy Eric.

But Eric won’t be willing to hear Stephanie’s apology this time. Eric will say that Stephanie’s anger and bitterness is out of control, and that he’s not going to take it anymore. Stephanie will protest, arguing that Brooke has some blame too, but Eric won’t want to hear it. Eric will tell Stephanie that they’re through, and he’ll walk out.

Next, on Tuesday’s encore episode of B&B, Lauren Fenmore (Tracey E. Bregman) will burst into Sally Spectra’s (Darlene Conley) office and scream, clearly needing to vent her emotions. Lauren will say that everything is awesome, since Eric had finally seen the light and that he’s kicking Stephanie to the curb.

Lauren will tell Sally all about how Stephanie lashed out at Brooke and how Eric overheard the whole thing. Sally will think that the “evil queen” showed her true colors at last, and Lauren will be thrilled that all of her waiting for Eric has finally paid off. Sally will be a bit less hopeful, warning Lauren to not count Stephanie out just yet.

Finally, Ridge Forrester (Ron Moss) and Taylor Hayes (Hunter Tylo) will have some nice family moments with baby Thomas Forrester. Ridge will enjoy being a dad to Thomas, and the parents will discuss how amazing it is having Thomas in their lives.

Taylor will acknowledge that Ridge has been through a tough time recently, and she’ll say that she’s there for him. Ridge will think that things will work out in time.

Ridge will agree that they should marry soon, which will excite Taylor who will be thrilled about making quick wedding plans.

Tuesday’s throwback episode of B&B sounds terrific, so don’t miss it! Stick with CDL for all of your Bold and the Beautiful daily recaps, spoilers, and news – we’ll definitely keep you updated on all the latest.