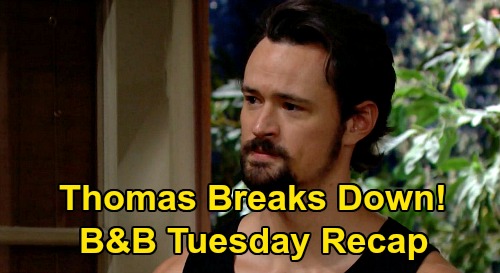 The Bold and the Beautiful spoilers recap for Tuesday, September 29, reveal that Thomas Forrester (Matthew Atkinson) showed up to the cabin to pick up Douglas Forrester (Henry Joesph Samiri).

Douglas was up at the main house, so Thomas talked with Hope Spencer (Annika Noelle) about Steffy Forrester (Jacqueline MacInnes Wood). Thomas had talked with Ridge Forrester (Thorsten Kaye) and he was upset to have learned that Steffy was on pills.

Hope then disclosed that she was really worried about Steffy, and that Steffy had pulled out a knife. Thomas got upset and started crying at the thought of his sister like that, and Hope was nearly in tears herself.

Thomas cried and said that Steffy needed serious help. Hope revealed that Liam Spencer (Scott Clifton) and John “Finn” Finnegan (Tanner Novlan) were over at Steffy’s to be a united front.

Thomas wondered why the doctor was involved, and Hope explained that while Finn had missed the warning signs, that he didn’t have anything to do with supplying Steffy with the pills she got illegally.

Thomas seemed really upset as Hope explained how Steffy was struggling with addiction, and he thought that he should be there at Steffy’s, but Hope thought that Liam, Finn, and Ridge had things under control.

Thomas continued to cry, and Hope comforted him, saying that Finn, Liam, and Ridge would get through to Steffy and give her the help that she needs.

Steffy insisted that the pain pills helped, and Finn interjected that the pills were highly addictive and shouldn’t be taken for longer than prescribed. Steffy thought that everyone was blowing things out of proportion, and she accused Liam, Ridge, and Finn of emotional abuse.

“You want to tell us where you got them?” Finn asked. Steffy lied and said she got them from “the pharmacy.” Ridge balked, and Steffy yelled at everyone to get out.

Steffy kept ranting about Liam and Hope kidnapping Kelly, and Ridge yelled back that no one got kidnapped and that Steffy pulled a knife. Steffy yelled back, but Ridge persisted, saying that Steffy wasn’t going to get better with the pills.

Finn looked really torn up over the whole scene, and he tried to reassure Steffy that no one was blaming Steffy. Ridge said that Steffy was taking pills that Finn didn’t prescribe to her, and that’s a sign of dependence.

Finn weighed in, saying that this was addiction beyond dependence, and that he knew it because of how aggressively Steffy asked for more pills, and because of the physical symptoms Steffy was having. Steffy yelled at Finn to shut up.

Finn went on, saying that Steffy had no idea what the dosage of the pills are, and she could overdose and die. Ridge said that he’s lost one daughter, and he’s not going to lose another one. “I couldn’t recover from it,” Ridge said.

Finn said that the lie directly affected his ability to treat Steffy, and Ridge said that he was scared for Steffy. Steffy then decided that she needed some help NOW, and she frantically located her pill bottle in the kitchen, then she proceeded to spill the pills by accident. “I just need some pills!” Steffy cried out.

Liam urged Steffy to find the strong, resilient woman inside herself that they all know and love. “My willpower is gone,” Steffy sobbed. Liam said that it wasn’t about willpower, and that it was a disease.

Finn said that there are effective treatments, and that Steffy could admit right then that she has a problem. “I just want my daughter back,” Steffy cried.

“I’ll get better. I’ll do it for Kelly, but you don’t understand. I’ve been in pain. They are the only thing that gives me peace.” And then Steffy had a big realization that stopped her in her tracks.

As Liam and Ridge stood there in tears, Steffy said, “Oh my God, I’m…” Finn said that Steffy could say it, and that if she wanted to stop, then she could.

Ridge gently walked over to Steffy and sat down next to her on the floor, as Steffy continued to sob.

That was a powerful episode of B&B, and there’s plenty more coming tomorrow, so stay tuned! Remember, here at CDL we’ll keep you up to speed on all the latest Bold and the Beautiful spoilers, updates, and news. Stick with us!