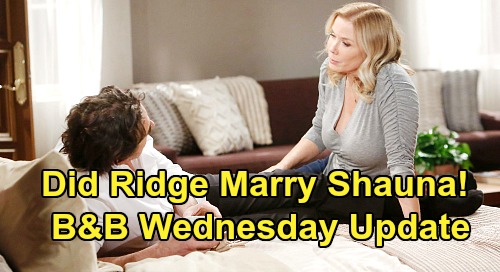 The Bold and the Beautiful (B&B) spoilers update for Wednesday, April 15, teases that Bill Spencer (Don Diamont) will want to get a few things straight with Quinn Forrester (Rena Sofer). After blasting Quinn over her role in the video scandal, Bill will offer a stern warning. He’ll make it clear that if Quinn ever hurts Katie Logan (Heather Tom) against, she’s going to regret it.

Of course, Quinn may counter that Bill hurt Katie most of all. Bill’s the one who was in a committed relationship with Katie and had a responsibility to keep his lips to himself. It’s not Quinn’s fault that Bill couldn’t resist a make-out session with Brooke Forrester (Katherine Kelly Lang).

However, Bill will only want to focus on Quinn and whatever else she might be cooking up. Bill will hope to protect Katie’s heart from further damage, so he’ll warn Quinn to back off.

The Bold and the Beautiful spoilers say Bill will vow to destroy Quinn if she doesn’t obey orders, but she probably won’t be rattled by his visit. It takes a lot more than this to get Quinn scared!

Meanwhile, Brooke will manage to get Ridge Forrester (Thorsten Kaye) back to Los Angeles with Matt the Forrester pilot’s (Kevin Frazier) help. Ridge just had a crazy, drunken night in Vegas with Shauna Fulton (Katrina Bowden). They capped it off outside a wedding chapel, so did Shauna and Ridge get married? If so, was it even legal?

Regardless, Shauna and Ridge were clearly feeling the Sin City heat! That’s why it’ll be baffling once Ridge ultimately awakens in LA with Brooke. Ridge will have no idea what happened thanks to his blackout drunk state.

Other Bold and the Beautiful spoilers say Sally Spectra (Courtney Hope) will get some troubling updates. Wyatt Spencer (Darin Brooks) isn’t thrilled about telling Sally to move out, but Flo Fulton (Katrina Bowden) talked him into it. What Flo hasn’t told Wyatt is that she’s battling serious suspicions about Sally’s terminal illness story.

Flo isn’t so sure Sally’s telling the truth, so she’ll watch Sally’s reaction closely on Wednesday. As you can imagine, Sally will be blindsided by the move-out blow. It’ll be hard for Sally to hide how much she hates Flo in general, but she’ll give it her best shot.

Nevertheless, Flo will eventually steal a moment alone with Sally and call her out on that hatred. The Bold and the Beautiful spoilers say Flo will play a dirty trick soon enough, so stay tuned for more drama.

As other B&B news emerges, we’ll deliver all the latest details. Be sure to pop back in CDL often for hot Bold and the Beautiful spoilers, news and updates.