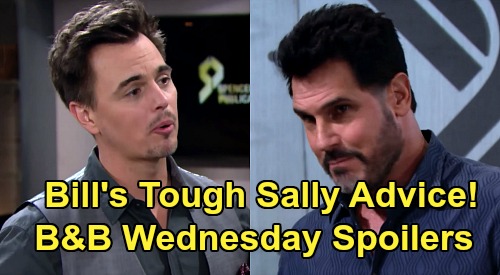 The Bold and the Beautiful spoilers for Wednesday, April 22, tease that Flo Fulton (Katrina Bowden) will finally have what she wants – a confession out of Sally Spectra (Courtney Hope). As B&B viewers know, Flo pushed Sally into finally admitting that she was faking her terminal illness. This came after Flo tricked Sally with a rubber snake and Sally jumped like a mad woman around the room. After that, it was pretty clear that Sally was faking, and Sally came out with the truth.

Well, Flo is going to have some choice words for Sally after that for sure. And we’ll see what Sally will do next. She might beg and plead for Flo to keep the truth from Wyatt Spencer (Darin Brooks), but that’s certainly not going to fly.

There’s no way that Flo is going to be deterred from telling Wyatt the truth, and it looks like she’ll plan on telling him ASAP.

Of course, as viewers know, Wyatt is currently busy over at Forrester Creations talking with Quinn Forrester (Rena Sofer) and Katie Logan (Heather Tom), so he’s oblivious to the drama that’s going down over at the beach house with Sally and Flo. And on Wednesday’s B&B episode, there will be much more drama that unfolds there.

According to B&B spoilers, Dr. Penny Escobar (Monica Ruiz) will arrive at the beach house amidst Flo and Sally’s argument. Sally probably won’t be in a good headspace, given that she’s just confessed everything to Flo, and she knows that the gig is soon going to be up. It looks like Dr. Escobar will get in the mix, and she’ll quickly realize that Sally has spilled the beans.

Well, we have to remember that Penny’s medical career could be on the line here. And while Penny doesn’t particularly like medicine and would much rather have a career in fashion designing, she’s certainly not going to want to lose her medical license and be exposed as a fraud who was a willing accomplice in a terminal illness scam. It seems that Penny will have words with Flo as well, and things will get heated.

In fact, Flo might just threaten to rat Penny out to the medical board, but whatever happens, B&B spoilers are clear about one thing – Penny’s going to strike.

Penny will seize the moment when Flo has her back turned and is preparing to contact Wyatt…and she’ll hit Flo upside the head with a heavy object that’s sitting around! That will leave Flo unconscious and Sally and Penny in a real predicament.

Meanwhile, on the new episode of B&B on Wednesday, April 22, Wyatt will have a heart-to-heart with his dad, Bill Spencer (Don Diamont). It appears that Bill will show up at Forrester Creations, most likely to try to talk with Katie about the problems they’ve been having in their marriage.

According to B&B spoilers, Bill will sit down with Katie and try to apologize again for kissing Brooke Forrester (Katherine Kelly Lang).

Unfortunately for Bill, Katie won’t be ready to hear his words just yet, as the whole thing is just too raw for her right now. But it looks like Bill will have better luck talking with Wyatt a bit later, which will be good because Wyatt really needs someone to talk to.

After Wyatt’s conversation with Katie and Quinn, he felt unsettled about asking Sally to move out, but perhaps Bill can help him put things into perspective.

Wyatt feels like he has a sense of responsibility to do right by Sally, and for him that means helping her live out her final days, which he believes will necessarily need to be spent in hospice care.

Perhaps Bill can help Wyatt work through his feelings of guilt over asking Sally to leave in order to make that happen. Wyatt needs some guidance right now, because he’s really faced with an impossible situation.

But little will Wyatt know about the events that are unfolding at the beach house while he’s having his talk with Bill. Flo will be in terrible danger, probably receiving a concussion at the very least, and possibly hurt much worse.

Ongoing B&B spoilers indicate that both Wyatt’s conversation with Bill and the beach house drama will continue on into Thursday’s episode, so much more excitement is coming.

Wednesday’s episode of B&B sounds great, so stay tuned to the CBS soap! We’ll be sure to provide you with updates as we hear more exciting B&B news. CDL is your go-to source for all the hot Bold and the Beautiful spoilers and updates.