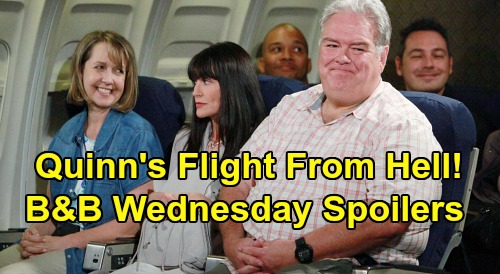 The Bold and the Beautiful spoilers for Wednesday, April 29, tease that viewers will be treated to an encore episode that originally aired on July 27, 2016, during which key characters arrived at the Spencer Summit in Monte Carlo, and Quinn Fuller (Rena Sofer) secretly followed Eric Forrester (John McCook) to the summit.

Eric, Steffy Forrester (Jacqueline MacInnes Wood), Wyatt Spencer (Darin Brooks), and Liam Spencer (Scott Clifton) will arrive at the Spencer Summit, greeted by Eva (Kelly Kruger), the Forrester International Publicist. Eric will have a big announcement to make, and Eva will advise that he do so on the red carpet rather than during his speech later.

Steffy will get a lot of attention on the red carpet as Forrester’s new “it” girl. Wyatt will be pleased with all of the attention that Steffy is getting, and he’ll tell the media that he’s proud of Steffy and that they’re accomplishing everything together.

Elsewhere on the red carpet, Liam will explain that Bill Spencer (Don Diamont) couldn’t be present for the summit, and that Eric would be speaking during the event.

Eric will speak to the press on the red carpet as well, and he’ll comment on how Steffy might be married to a Spencer, but that she’d always be a Forrester. Eric will then make his big announcement to the press – that although he recently stepped back from the company, he’s returning to his position as CEO of Forrester Creations. That will create quite a press buzz, and Eric will smile happily for pictures.

Liam will speak on the red carpet as well, noting that he’s happy about giving back and making a difference, while Wyatt speaks about the new online experience for Spencer’s readers. Wyatt will say that Spencer will be a leader in news and social media platforms.

After the summit concludes, Eric will meet with Eva in his hotel suite, and it will be revealed that Eric’s speech and announcement at the summit were well-received.

Once Eva’s gone, the hotel manager will arrive and congratulate Eric about reclaiming the CEO spot. The manager will also inquire as to whether anyone accompanied Eric on the trip, and Eric will note that he’s there alone. Later, Eric will think about kissing Quinn.

Meanwhile, out at the beach, Wyatt and Steffy will run through the rain, finally finding shelter under a big umbrella. They’ll comment on the rain and will canoodle happily together, as Wyatt comments on Steffy’s amazing number of followers on social media. Wyatt will gush about how impressive Steffy was at the summit, and they’ll decide to celebrate with some champagne.

While all this is going on, Liam will watch Steffy and Wyatt. When Wyatt steps away, Liam will approach Steffy and voice his concern about Steffy having enough security while in Monte Carlo. But Steffy will balk, saying that there isn’t anything to worry about since Quinn is back in LA.

Wyatt will return with champagne and promptly tell Liam to lighten up. Liam will take off, and Wyatt will take some photos of Steffy drinking champagne. As Wyatt and Steffy laugh and have fun with the pictures, Liam will sadly watch from afar.

Quinn will end up having a difficult flight with the couple, who will continue to sing and will end up sharing a big blanket with her. Quinn will have to endure looking at photos of the couple’s son and their dog, and during turbulence the woman will vomit in Quinn’s lap.

The couple will continue on with their annoying habits, but finally the flight will come to a conclusion, and Quinn will be thankful.

Wednesday’s encore episode sounds fantastic, so stay tuned to the CBS soap! We’ll give you updates as more B&B news comes in. And keep checking CDL for the latest Bold and the Beautiful daily recaps and updates.