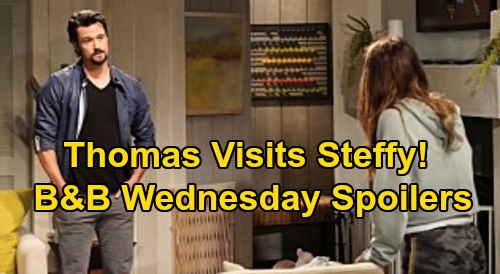 The Bold and the Beautiful spoilers for Wednesday, August 5, tease that Sally Spectra (Courtney Hope) will have to face the music big time. As B&B viewers know, Katie Logan (Heather Tom) has just learned all about Sally’s fake terminal illness scam and her kidnapping of Flo Fulton (Katrina Bowden) from Flo and Wyatt Spencer (Darin Brooks).

That led Katie to rush over to Sally’s apartment where she’s currently standing face-to-face with Sally and demanding answers.

“How could you?” Katie fumed at Sally. Well, now Sally is going to have to hear all about how Katie feels betrayed and how she genuinely cared about Sally when she thought that Sally was dying.

According to B&B spoilers, Katie will do her fair share of lecturing on Wednesday’s episode, blasting Sally for manipulating her and using her to spread the news of Sally’s supposed illness.

Viewers should see Sally once again try to explain herself, but there’s not going to be much that she can say at this point. Sally will probably need to just let Katie have her say and get it out of her system.

Sally’s standard arguments – that she did it out of love for Wyatt and didn’t want to lose out to Flo yet again – probably will wear thin at this point. At any rate, it doesn’t look like Katie will buy any of Sally’s sob story.

Meanwhile, on the new episode of B&B on Wednesday, August 5, Thomas Forrester (Matthew Atkinson) will return back home. As B&B viewers know, Ridge Forrester (Thorsten Kaye) made a point of saying on a recent episode that he had contacted both Taylor Hayes (Hunter Tylo) and Thomas concerning Steffy Forrester’s (Jacqueline MacInnes Wood) motorcycle accident.

Well, Steffy is pretty beat up from the accident, both physically and psychologically, and she’s in a lot of pain but she’s resisting taking her pain meds on the grounds that she doesn’t want to be groggy around her daughter Kelly Spencer (Colette and Avalon Gray).

Still, with everyone pressuring her to take the meds and stay ahead of the pain, Steffy is reluctantly taking her meds.

According to B&B spoilers, Thomas will go to see Steffy, and he’ll have done some serious soul-searching while he was away. Thomas will be in a very different place after really thinking about all of his lies and manipulations in the past.

It seems that being publicly “outed” at his wedding to Zoe Buckingham (Kiara Barnes) by Hope Spencer (Annika Noelle) really hit home with Thomas, and it’s been made clear in recent episode that he’s been in contact with Douglas Forrester (Henry Joseph Samiri), too.

It seems that Thomas will feel terribly that he wasn’t there at the time of Steffy’s accident, and we’ll probably see him make peace with Steffy on Wednesday’s episode.

Thomas will probably feel that none of the past matters – even the fact that Steffy colluded with Hope and Liam Spencer (Scott Clifton) to expose him at the wedding. Now that Steffy has been hurt and could have been killed, Thomas will want to repair his relationship with his sister and make sure that she’s ok.

Wednesday’s all-new episode of B&B sounds terrific, so be sure to stay tuned! Remember that CDL is your go-to source for everything B&B – you can count on us for your ongoing B&B news, sizzling spoilers, and detailed daily episode recaps.