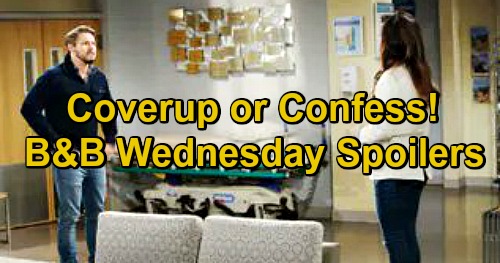 The Bold and the Beautiful spoilers for Wednesday, December 9, tease that Steffy Forrester (Jacqueline MacInnes Wood) will reel from what she’s just heard about Thomas Forrester (Matthew Atkinson).

As B&B viewers know, Liam Spencer (Scott Clifton) has just told Steffy that Hope Spencer (Annika Noelle) and Thomas weren’t in fact kissing, but that Thomas was so out of it that he was kissing the Hope mannequin.

That’s going to seriously stress out Steffy on multiple levels. For one, she’ll be worried about Thomas’ well-being and his mental health. Steffy’s going to feel horribly that her brother was in such a psychological state as to be kissing a mannequin thinking that it was real.

But then, Steffy’s going to realize that this whole thing means that Hope never cheated with Thomas, yet Liam cheated big time and now his marriage could be ruined as a result.

We’ll see how that conversation goes, and whether Liam and Steffy are on the same page about what to do next. Steffy and Liam might decide to table the conversation until Thomas is out of the woods.

Meanwhile, on the new episode of B&B on Wednesday, December 9, it looks like Quinn Forrester (Rena Sofer) will continue to eavesdrop on Shauna Fulton (Denise Richards) and Eric Forrester (John McCook) over at the Forrester mansion. A

s B&B viewers know, Shauna was in the midst of trying to convince Eric to forgive Quinn and take her back when Quinn arrived at the mansion and started secretly listening into the conversation.

So far, Shauna has lobbied hard for Quinn, and Quinn has heard some of this. One might expect that Quinn would like what she’s hearing from Shauna, but what comes next might actually really irk Quinn.

According to B&B spoilers, Eric will express how impressed he is with Shauna’s loyalty to Quinn and how she’s going to bat for her friend. That might worry Quinn about whether Eric’s developing an attraction toward Shauna!

And if Shauna in turn starts going on about what a great guy Eric is, then Quinn could jump to the conclusion that Shauna is trying to steal her man. Of course, Quinn’s big fear is that Shauna will swoop in and replace her as the lady of the Forrester mansion, so she’ll probably read into what she’s hearing quite a bit.

We’ll see just how long Quinn is able to stay hidden and keep her mouth shut!

It sounds like a lot of B&B drama is heating up for Wednesday’s episode, so stay tuned! Be sure to keep CDL at the ready so you don’t miss any of the latest Bold and the Beautiful spoilers, updates, and news. Check out our daily episode recaps, too!