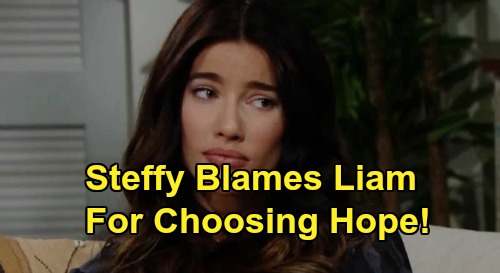 The Bold and the Beautiful spoilers recap for Wednesday, February 19, reveal that Ridge Forrester (Thorsten Kaye) played happily with Kelly Spencer (Avalon and Colette Gray) at Steffy Forrester’s (Jacqueline MacInnes Wood) house. Ridge said that Thomas Forrester (Matthew Atkinson) wanted Steffy to attend a family dinner at the mansion tonight, and Steffy wondered what Thomas was up to now.

This exasperated Ridge, who implored Steffy to give Thomas another chance. He noted that Thomas was trying to put his life back together and he wondered why it was so hard for her to trust him. Steffy then flashed back to Thomas manipulating her kiss with Liam Spencer (Scott Clifton) and Hope Logan (Annika Noelle) seeing the whole thing.

Meanwhile, in the Forrester CEO office, Zoe Buckingham (Kiara Barnes) told Liam that Thomas was trying hard to prove that he’s changed. Liam called it “a real show” and questioned whether Thomas’ feelings for Zoe were real. Zoe said that in the beginning she was cautious, too, but that Thomas had a plan for the future, and that she was part of it.

Liam then left and showed up at Steffy’s with Beth Spencer (River Davidson and Madeline Valdez). He joined Ridge and Steffy and promptly learned about the family dinner that Thomas was arranging.

Ridge said that hopefully Brooke Forrester (Katherine Kelly Lang) would attend, and that Hope and Douglas Forrester (Henry Joseph Samiri) would be there, along with Zoe. Liam decided that he wanted to go, to see what was going to unfold.

Later, after Ridge took off, Steffy, Liam, Beth, and Kelly enjoyed some fun family time together. Steffy and Liam chatted a bit about how they wanted the girls to be close, but that it was difficult right now due to Hope having seen their kiss.

Steffy said that she felt bad about that, but Liam said that it wasn’t like she did anything malicious – after all, she didn’t know that Hope would be standing there.

Liam then suggested that they get a babysitter for later tonight so they could go to the Forrester dinner together. He mentioned that he saw Zoe earlier and that he warned her that Thomas was using her to get to Hope. After putting the girls down for naps, Liam mentioned how much he loved being there with Steffy and the girls.

Steffy pointed out that he still chose Hope – after all, he proposed to her. Steffy said that she just couldn’t understand Hope not jumping on having a life with Liam and their child.

Meanwhile, backstage at Forrester, Hope promised Douglas that nothing would ever come between them. Douglas lamented that his dad was with Zoe now, and he told Hope that he wanted to be with her and that he wouldn’t let anyone take her place.

Thomas then walked up and asked Douglas what was wrong, and Hope explained that Douglas was confused and afraid that she won’t be his mom anymore.

Thomas turned to Douglas and told him not to be scared, and that his relationship with Zoe was a good thing and that Douglas should give it a chance. “Trust me, it will all work out for us,” he told Douglas. Douglas said that Zoe wasn’t family, and Thomas tried to get him to agree to do more stuff with Zoe, but Douglas said that he didn’t want to lose Mommy.

Thomas told Douglas that Hope didn’t want them to be together, and that she gets to decide who she wants to spend her time with. Hope quickly interjected that she wanted to spend time with Douglas and Beth.

Thomas told Douglas that everything would be ok, but that things needed to change. Douglas looked glum, and Hope asked to talk with Thomas for a moment.

Thomas and Hope stepped aside and she pointed out that telling Douglas that everything was going to change wasn’t helping. Thomas told Hope that all the reassurances in the world won’t change the reality that he’s in a relationship with Zoe, and that one day, Douglas would have another mom. Hope looked horrified.

Zoe then walked in and tried to make nice with Douglas, but Douglas froze her out. Thomas announced that he had plans for a family dinner tonight, and that Zoe, Douglas, and Hope should be there.

Douglas balked when he heard that the dinner was basically for Zoe, but Thomas insisted that Hope and Douglas attend. He told Douglas that after tonight, everything they hope for will soon come true.

That was a great episode of B&B, and it sounds like tomorrow’s show will be action packed as well. Be sure to stay tuned, and we’ll keep you informed on the latest B&B news as it comes in. And don’t forget to check CDL for all the latest Bold and the Beautiful recaps, news, and spoilers.