BY Heather Hughes on February 5, 2020 | Comments: one comment
Related : Soap Opera, Spoiler, Television, The Bold and the Beautiful 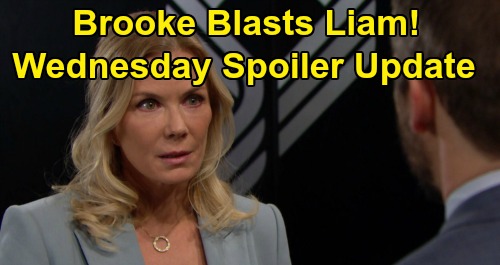 The Bold and the Beautiful (B&B) spoilers update for Wednesday, February 5, teases that Liam Spencer (Scott Clifton) will get an earful from Brooke Forrester (Katherine Kelly Lang). Naturally, Brooke will be upset over Liam’s recent kiss with Steffy Forrester (Jacqueline MacInnes Wood), which led to the destruction of “Lope.”

After Brooke unleashes her wrath on Liam, she’ll insist it’s not too late to fix this. Brooke will order Liam to repair the damage and put his relationship back together. She won’t want her daughter to lose the man she wants, but Hope Logan (Annika Noelle) made it crystal clear she’s done.

Liam may point out that Hope was adamant about walking away. He certainly won’t share the same optimism Brooke does, but Brooke won’t let it go. She’ll still think Liam and Hope belong together, so she’ll focus on the person truly responsible for this mess: Thomas Forrester (Matthew Atkinson).

Brooke will argue that without Thomas’ interference, Liam and Hope’s happy relationship would still be intact. Of course, there are no guarantees since Hope argued Steffy was the real problem.

Brooke insisted Steffy would always come between them, so Liam may acknowledge that his feelings for Steffy were an issue. He’ll at least admit Thomas wasn’t to blame for the kiss that Hope witnessed.

Liam will own up to willingly kissing Steffy back that fateful day. Thomas didn’t force Liam to do anything, so B&B fans know Liam’s right on some level. However, Liam doesn’t know Thomas notified Steffy of Hope’s arrival.

Thaoms arranged it so Hope would get a front-row seat of the “Steam” lip lock. Liam will remain in the dark on that for the time being – and so will Brooke.

Nevertheless, Brooke will blame Thomas for that kiss and everything else. Liam will actually find some common ground with Brooke when it comes to Thomas’ overall manipulation.

Liam will agree that Thomas is still playing Hope, but Brooke will shift gears and concentrate on Liam’s living arrangement. She won’t like all the time Liam’s spending at Steffy’s place, but Brooke really needs to butt out at this point!

Other Bold and the Beautiful spoilers say Thomas will stun Quinn with an enticing proposal. He’ll suggest that they should form an alliance – one that could sink Brooke and give them both what they want.

Quinn’s eager to push Brooke out of the Forrester family, which is Thomas’ goal, too. In fact, Thomas would love to rid the Forresters of the whole Logan clan with the exception of Hope.

Thomas will try to fuel Quinn’s rage and convince her that two heads would be better than one. He’ll think they’d make an unstoppable dark force, so Quinn will have to decide if the risk’s worth it!