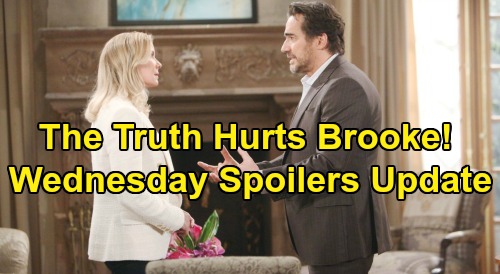 The Bold and the Beautiful (B&B) spoilers update for Wednesday, January 15, teases that Brooke Forrester (Katherine Kelly Lang) will unleash her wrath. B&B fans know Ridge Forrester (Thorsten Kaye) has shared some kisses with Shauna Fulton (Denise Richards) behind Brooke’s back, but he’ll ultimately decide to come clean. Ridge will fill Brooke in on those kisses and hope she can understand that he was in a dark, vulnerable place.

Of course, Brooke won’t be pleased with Ridge for locking lips with Shauna while he was supposedly trying to save their marriage. She won’t think Ridge was putting in the real effort if he was off kissing Shauna! Even so, Brooke can get past Ridge’s momentary lapse in judgment. It’s Shauna who’ll face Brooke’s true fury in Wednesday’s episode.

At the Forrester mansion, Brooke will rip into Shauna for contributing to Ridge’s betrayal. She’ll think Shauna was taking advantage of the situation, but she’ll make it clear that it’s not going to happen again. The Bold and the Beautiful spoilers say Shauna won’t pay attention to Brooke’s warnings. She won’t feel threatened at all, so she’ll just push Brooke’s buttons right back.

Brooke will eventually slap Shauna across the face while Quinn Forrester (Rena Sofer) watches. Quinn will be livid with Brooke for blowing in there and acting like it’s her way or the highway. She may urge Brooke to leave, but it’s Shauna that Brooke will want out of there. In fact, Brooke will soon urge Eric Forrester (John McCook) to kick Shauna to the curb!

Other Bold and the Beautiful spoilers say “Flo” Fulton’s (Katrina Bowden) conversation with Wyatt Spencer (Darin Brooks) will be far more serene. They’ll continue catching up at the guesthouse, so B&B viewers can expect their bond to grow stronger. Wyatt and Flo are both pining for each other, but things are currently a bit complicated thanks to Wyatt’s engagement to Sally Spectra (Courtney Hope).

Things will remain complicated even after Wyatt dumps Sally next week, January 20-24, but let’s focus on Katie Logan’s (Heather Tom) meeting for now. She’ll encourage Wyatt and Flo to join in, so they’ll wonder what Katie has in mind. It turns out Katie intends to seek forgiveness, which is odd considering she really hasn’t done anything wrong lately!

Perhaps Katie’s real goal is making everybody see that we all need a little forgiveness sometimes. Katie’s made mistakes in the past, but she’ll be all about new beginnings. This could be Katie’s way of convincing everyone to forgive Flo and embrace her as part of the Logan family again.