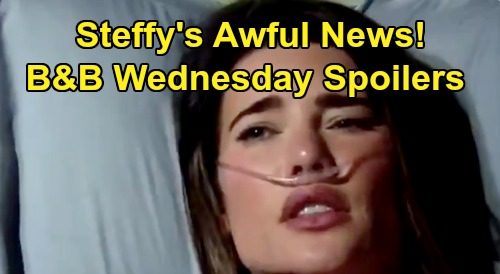 The Bold and the Beautiful spoilers for Wednesday, July 29, tease that Steffy Forrester (Jacqueline MacInnes Wood) will become more awake and alert. As B&B viewers know, Steffy woke up as Ridge Forrester (Thorsten Kaye) was at her bedside begging her to return to him.

It won’t be long before Dr. John “Finn” Finnegan (Tanner Novlan) rushes in to examine Steffy and check on her vitals, and Steffy will get a first glimpse of the man who she’ll eventually become romantically involved with.

But it won’t be a pleasant awakening for Steffy, as B&B spoilers say that she’ll be in immeasurable pain as a result of her injuries from the accident. Given that her motorbike collided with Bill Spencer’s (Don Diamont) car and that she was thrown from the bike, Steffy will have some pretty hefty injuries to deal with and a lot of pain to tolerate.

It looks like Dr. Finnegan will pretty quickly share with Steffy that she suffered a sprained back and several fractured ribs.

Of course, Ridge is going to be beside himself with worry over Steffy’s prognosis, and he’ll still be furious with Bill for causing his daughter so much physical pain. Speaking of Bill, Detective Alex Sanchez (Jeremy Ray Valdez) will want a detailed statement from him about what actually happened at the time of the accident.

Detective Sanchez will likely want to know whether Bill was texting or otherwise driving distracted at the moment of impact. We’ll see what Bill has to say.

Meanwhile, over at Sally Spectra’s (Courtney Hope) apartment, she’ll just want the chance to explain to Wyatt Spencer (Darin Brooks) exactly why she did everything that she did.

As B&B viewers know, Flo Fulton (Katrina Bowden) explained the whole story to Wyatt in detail about how Sally wasn’t really terminally ill and how she faked her illness and symptoms in order to get closer to Wyatt and keep him away from Flo.

But Sally will surely want to tell Wyatt why she did it, and she’ll hope that Wyatt will understand her motives and her true love for him. But it seems that rather than garner Wyatt’s sympathy, Wyatt will fire questions at Sally and blast her for making him and everyone else worry about her.

Wyatt will probably point out that Sally strung a lot of people along, including Katie Logan (Heather Tom), Ridge, and Steffy.

Well, according to B&B spoilers, Sally will get pretty worked up during her interaction with Wyatt, and as she gets agitated, she’ll suffer a real medical emergency.

Of course, Wyatt and Flo are probably going to assume that Sally is just faking the whole thing like she faked her illness and previous symptoms. But Penny Escobar (Monica Ruiz), who will also be present, will begin to wonder whether Sally is having a real medical episode.

And soon, Sally will keel over and become unconscious. It looks like Penny will rush over and examine Sally, telling Wyatt and Flo that Sally is unconscious for real.

Now, exactly what’s causing Sally’s episode remains to be seen, but it could be complications resulting from her being knocked unconscious by Flo earlier in the day. Or, it could wind up being something much more serious.

Whatever the case, B&B spoilers say that Sally will be rushed to the hospital, where she’ll wind up admitted and being treated by Dr. Joyce Griffith (Lisa Canning). It looks like we may find out what’s wrong with Sally a bit later in the week, so be sure to stay tuned! Remember, CDL is your place for all the latest soap news and spoilers, and don’t miss our daily B&B recaps as well.