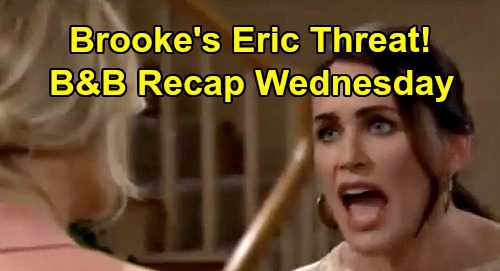 The Bold and the Beautiful spoilers recap for Wednesday, March 25, reveal that Steffy Forrester (Jacqueline MacInnes Wood) spoke with Ridge Forrester (Thorsten Kaye) in the Forrester CEO office. Ridge wondered how Steffy was doing, and she said that she missed Liam Spencer (Scott Clifton), but that he was where he should be now.

Ridge soon disclosed that he spent last night with Brooke Forrester (Katherine Kelly Lang), and he enthused about how they were happy and back together. Ridge said that Brooke was right about Thomas Forrester (Matthew Atkinson) all along, and that he’ll never doubt or question anything she says going forward.

Ridge then asked if Steffy was coming to the reunion party later, and Steffy said yes. Ridge mentioned that Bill Spencer (Don Diamont) would be there, and Steffy thought that sounded like a recipe for disaster.

Ridge said that Katie Logan (Heather Tom) loved Bill and that they’d call a truce for the evening. Ridge told Steffy about the digital picture frame, and Steffy thought it sounded romantic.

Meanwhile, at Brooke’s place, Donna Logan (Jennifer Gareis) was ruminating about seeing Bill and Brooke’s kiss video when Katie walked in, wondering where Brooke was.

Donna covered, and Katie wanted to see the digital picture frame. Donna sweated it out as Katie picked up the frame and looked for the “on” button. Donna nervously said that it was probably out of battery power.

Bill then waked in and kissed Katie, with Donna looking on uncomfortably. Bill wondered why Donna was looking at him strangely, and Donna made up some excuse. Katie went on about how Brooke and Ridge’s love is true, and Donna quipped that Katie was Bill’s “one and only” as well. Bill looked unnerved.

Steffy and Ridge arrived, both wondering where Brooke was. Ridge acknowledged Bill and said that he was glad Bill and Katie were there. Bill couldn’t resist and said that there wouldn’t have been a need for a reconciliation if Ridge would have been supportive of Brooke.

Katie then whisked Bill away, and Donna busied herself while Steffy and Ridge wondered where the picture frame was. Donna looked nervous.

Over at the Forrester mansion, Brooke and Quinn Forrester (Rena Sofer) argued. Quinn toyed with Brooke, calling her a drama queen and saying that she was making wild accusations. Brooke said that she knew all about what Quinn did, and Quinn specifically brought up her kiss with Bill, saying that she warned Brooke not to cross her.

Brooke said Quinn was shameless, and Quinn fired right back that Brooke was the one who was shameless, kissing Bill behind Ridge’s back. Brooke demanded to know how Quinn got the video, and eventually Quinn told the story of how Shauna Fulton (Denise Richards) took the video but refused to use it, then deleted it from her phone.

Brooke quickly realized that Quinn had stolen the video from Shauna, and that she was the one who uploaded it to the digital feed. Brooke promised to fight back hard, and she said that nothing was going to come between her and Ridge. Quinn smiled sweetly, telling Brooke that she had a party to host, and that there was no better place to expose her than at the reunion celebration.

Brooke refused to be intimidated, and then explained to Quinn that she and Bill got caught up in a moment and that it didn’t mean anything. Quinn didn’t buy it, and she blasted Brooke for doing this to Katie and Ridge.

Finally, Brooke asked what Quinn wanted, and Quinn asked her to leave Ridge, leave LA, and leave the Forrester family for good. Brooke refused, saying she wouldn’t be blackmailed.

Brooke then declared that she was going to go tell Ridge the truth, and that both Ridge and Eric Forrester (John McCook) would see what a despicable person Quinn was. Brooke vowed that in the end, Quinn would be the one to walk away from here. Quinn just smiled.

That was a great episode, and there’s more on the way, so stay tuned to B&B. We’ll keep you informed as additional Bold and the Beautiful news comes in. Stick with the CBS soap and remember that CDL is your place for news, updates, and spoilers on all the soaps.