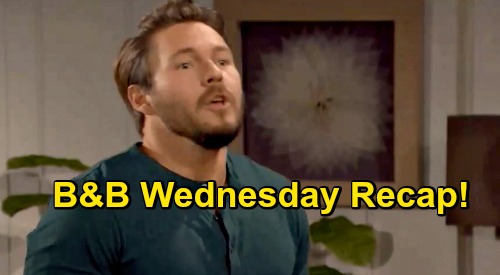 Ridge shared that he and Brooke Forrester (Katherine Kelly Lang) were still married, and Steffy was happy for her dad. Ridge wasn’t sure if Thomas Forrester (Matthew Atkinson) would be happy for them, but Steffy thought that Ridge shouldn’t worry about Thomas.

Ridge said that he was glad that Steffy was doing better, and Steffy credited her father for helping her through her ordeal. Ridge mentioned Liam Spencer (Scott Clifton) and John “Finn” Finnegan (Tanner Novlan) and all the good people Steffy had around her.

Ridge teased Steffy a little bit about her relationship with Finn, and Ridge said that it was nice to see someone treating Steffy the way she should be treated.

As Ridge was walking out, Liam and Hope Spencer (Annika Noelle) walked in, having come to see Kelly Spencer (Colette and Avalon Gray). Liam went into Kelly’s room to see her, and Hope said that Steffy looked great, and that a certain doctor must have something to do with that.

Hope said that Liam was really able to accept Steffy’s moving on, but Steffy said she wasn’t worried about that.

Liam returned to the room and he asked about Finn. Steffy decided to mess with Liam, and she told Liam that she and Finn were running off to Cabo and getting married.

Liam was shocked, then he realized that Steffy was kidding him. Liam said that Finn had proven himself to be a good guy and that he was good to Steffy and Kelly, so Liam said he was happy for Steffy.

Liam, Hope, and Steffy agreed that they were in a good place now as a big, happy family. Liam then said that he still didn’t trust Thomas, even though he wasn’t accusing him of anything.

Liam said that even though things feel good now, that he’ll stay vigilant when it comes to Thomas, since Thomas kept proving that he was disturbed.

At the apartment, Thomas had a moment with the Hope mannequin. The mannequin told Thomas to stay and not to go to work, and that he was the man she always wanted…not Liam.

Later, Thomas showed up in the Forrester CEO office to get sketching, and Finn walked in looking for Steffy. Finn was in a good mood and joked with Thomas a little, but Thomas was in a serious and intense mood and Finn’s jokes didn’t really fly.

Thomas was all business and needed to get back to work, so Finn went to leave. Thomas stopped Finn, saying that he wanted to say something to Finn. It turned out that Thomas wanted to thank Finn for looking after Steffy.

Finn was appreciative and wondered if they were having a “bonding moment.” Thomas scoffed, and Finn said that Thomas and Steffy seemed to have different ways of relating.

Thomas noted that both he and Steffy were headstrong, and then he launched into a tirade about Liam and how he was protective of Steffy because Liam had jerked Steffy around over and over again.

Thomas totally went off on Liam, saying he couldn’t forgive Liam for ripping Steffy apart, and that Liam was a waffler. Finn said that Hope and Liam seemed happy with Beth Spencer (River Davidson and Madeline Valdez), and he mentioned Douglas Forrester (Henry Joseph Samiri) as well.

Finn wondered how coparenting with Hope was going, and Thomas said that Hope was amazing, and that Douglas was thriving. Finn thought that Liam seemed committed to Hope, and Thomas said, “That’s Liam’s MO – He’ll circle back to Steffy again and it won’t matter that you’re there.”

Finn said that Thomas doesn’t give him enough credit, but Thomas told Finn not to trust Liam.

Thomas got worked up about Liam, saying that Liam gets to him like nobody else, and Finn said that he had heard what happened with Beth. Thomas admitted to hurting a lot of people, and Finn mentioned Thomas’ feelings for Hope.

Thomas then said that things were pretty good between him and Hope, and as he talked, he started hearing the mannequin’s voice again.

Thomas rambled, saying that Hope was starting to respect him as a man and that she really wants to be with him and not Liam. “Hope really said that?” Finn asked.

Thomas seemed out of it and he was distracted by the mannequin’s voice again. “You ok?” Finn asked Thomas, and Thomas appeared to be very disturbed by the voice he was hearing in his head.

That was a great episode of B&B, and there’s much more drama coming tomorrow, so stay tuned! We’ll be sure to keep you up to speed on all the latest B&B spoilers and news as it comes in. Remember, CDL is your go-to source for all the soaps.