The Bold and the Beautiful Spoilers: Week of April 13 Preview – Flo Accuses Sally of Being a Fraud – Medical Records Exposed 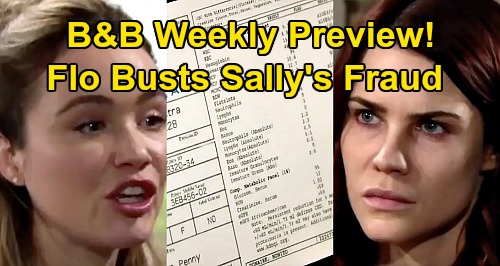 The Bold and the Beautiful (B&B) spoilers preview for the week of April 13-17 teases that some hot drama’s ahead. First, Sally Spectra (Courtney Hope) will keep trying to make Wyatt Spencer (Darin Brooks) see things her way. Wyatt will look concerned as Sally breaks down in tears and blames Flo Fulton (Katrina Bowden) for their time apart.

Sally will insist they should be together and would be if it weren’t for Flo. After Sally begs Wyatt to tell her that Flo won’t come between them, he’ll be in a tight spot. Wyatt will hope to handle the matter delicately since he believes Sally’s dying, but Sally won’t make it easy. As for Flo, she’ll become even more convinced of Sally’s deception.

During a faceoff with Sally, Flo will insist this arrangement’s no longer working for her. Since Sally’s been resorting to emotional blackmail, Flo will want her out of Wyatt’s house. B&B fans can expect Sally to be speechless momentarily. Sally’s shock will quickly turn to anger, which she’ll struggle to keep hidden from a suspicious Flo.

Although Sally’s been trying to play nice for the sake of her plot, Flo will soon make that tougher. The Bold and the Beautiful spoilers say Flo will decide to put her rival to the test. Wyatt won’t be in the loop on Flo’s trick, but Flo will move forward with it anyway and count on her strategy working.

B&B’s weekly preview video shows Flo saying, “Do you really feel anything but hatred toward me?” Sally glares back at Flo, who keeps at it. Later in the promo, Flo snaps that this is over and accuses Sally of being a fraud.

The Bold and the Beautiful spoilers say Flo will push Sally to admit it, which is probably where the trick comes in.

Despite how the preview video is edited, it doesn’t look like Flo will have solid proof before this confrontation. Instead, it seems Flo will pretend she knows for a fact Sally is faking her deadly illness. Basically, Flo will take a chance and hope Sally exposes her own scheme!

Of course, Sally’s a smart gal and isn’t going to fall for that – not completely anyway. Even so, Sally’s reaction will let Flo know she’s on the right track. Flo will sense the fear in Sally and determine that it’s time for drastic action.

In Dr. Penny Escobar’s (Monica Ruiz) office, Flo will get sneaky and pull up Sally’s medical records. After Flo looks over those records, she’ll be rocked by what she finds. It looks like Flo will discover confirmation that Sally’s been duping Wyatt this whole time.

Things are about to get wild on B&B, so don’t miss what’s in store! As other updates become available, we’ll pass along all the latest news. How do you feel about Flo playing detective? Do you think Flo’s a hypocrite since she used to be a scammer herself? CDL’s the place to be for sizzling Bold and the Beautiful spoilers, news and updates.