The Bold and the Beautiful Spoilers: Week of February 10 Preview – Sally Has One Month Left to Live Before Death – Wyatt Desperate 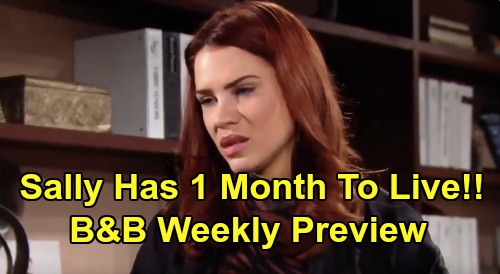 The Bold and the Beautiful (B&B) spoilers preview for the week of February 10-14 tease that Sally Spectra (Courtney Hope) will get the worst news of her life. B&B fans know Sally’s already been anxious about her imminent diagnosis. She doesn’t know what she’s up against, but she can’t shake the feeling that it’s truly serious.

Dr. Escobar (Monica Ruiz) will deliver total devastation when she gives Sally her test results. Sally will be in shock when she learns she’s only got one month left to live! Katie Logan (Heather Tom) will naturally be concerned about how Sally’s going to cope. She’ll offer a shoulder to cry on, but she’ll think Sally should tell Wyatt Spencer (Darin Brooks) what’s going on, too.

However, Sally will stand her ground on keeping Wyatt in the dark. She’ll believe she should hide her illness and just try to process it as best as she can. Later, Sally will suggest you never expect to hear you have so little time left. She’ll eventually collapse and leave Katie scrambling to help her up again.

It looks like Sally will want to leave some final designs behind – perhaps as a lasting legacy. Sally will do her best to draw, but she’ll once again struggle with shaking and an inability to focus. She’ll cry as she tosses the pencil in frustration. It’s clear that Sally will be a train wreck over this nightmare she’s dealing with.

Other Bold and the Beautiful spoilers say Katie will blab to Bill Spencer (Don Diamont). Despite being sworn to secrecy, Katie will just need to someone to talk to. She won’t want to keep secrets from her partner anyway, and she could really use Bill’s advice.

Bill is Wyatt’s father, so he knows his son quite well – certainly well enough to realize Wyatt would want to be in the loop. Once Katie shares that Sally’s dying, Bill will be absolutely floored. He always thought of Sally as someone who was invincible.

Katie will point out that Sally’s always ready for a right. She’ll imagine it’s terrifying to face one that the doctors say Sally can’t win. There’ll be treatment options for Sally, but they would only prolong her crisis and delay the inevitable. Sally will refuse to put herself through anything like that, but Katie will wish she’d reconsider.

After Katie’s conversation with Bill, she’ll decide it’s time for Wyatt to hear the truth. Katie will drop the bomb on Wyatt and leave him reeling. The Bold and the Beautiful spoilers say Wyatt will be a mess over Sally’s diagnosis.

B&B’s weekly preview video shows Wyatt saying, “This can’t be happening. She needs me now! No one should go through something like this alone!” Of course, getting Sally to accept Wyatt’s support could be difficult. Sally’s stubborn and hurting right now, so Wyatt will face a battle as he tries to be there for her.