The Bold and the Beautiful Spoilers: Week of February 17 – Sally Gets Another Shock – Liam Nails Thomas – Zoe’s Engagement 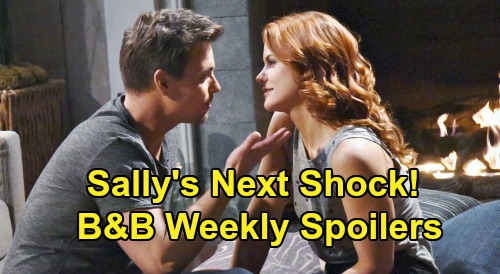 The Bold and the Beautiful (B&B) spoilers for the week of February 17-21 tease that some tough drama’s in store. For starters, Wyatt Spencer (Darin Brooks) will still be trying to process Sally Spectra’s (Courtney Hope) heartbreaking diagnosis. As Wyatt frets about Sally’s fate, Flo Fulton (Katrina Bowden) will offer plenty of support.

Katie will wonder if she really made the right call, but there’ll be no going back. Sally’s bound to find out Katie spilled eventually, so Katie will just have to live with the consequences.

Something tells us Sally will be upset initially and grateful later. The truth is Sally needs support – Wyatt simply won’t be able to stay away now that he knows what she’s up against.

Over with Liam Spencer (Scott Clifton), he’ll have some harsh words for Thomas Forrester (Matthew Atkinson). Liam will make some serious accusations, so he’ll definitely cause a major scene.

That’s because Hope Logan (Annika Noelle) and Zoe Buckingham (Kiara Barnes) will overhear. Once they get updates on Liam’s latest allegations, they’ll weigh in with their own thoughts on the matter.

Of course, The Bold and the Beautiful spoilers say Thomas will remain focused on his goal. He wants Hope to be his main squeeze, so he’ll keep taking steps toward making that happen.

Douglas Forrester (Henry Joseph Samiri) will once again by a pawn in Thomas’ game. He’ll unwittingly tug at Hope’s heartstrings by passing along a strategic message – some crucial news for Hope to consider.

Later, Douglas will have another meltdown about potentially losing Hope as his mommy. He won’t want Zoe taking her place and won’t seem willing to listen to Hope’s reassurance.

Back with Liam, he’ll rev up his efforts to make Zoe see the light. Liam will want Zoe to really look at what Thomas is doing here. He’ll think if Zoe starts paying attention, she’ll see the signs of blatant manipulation.

Zoe might think there’s some truth to that after Thomas suddenly proposes! It’ll be a move that’s out of the blue, so Zoe will make a demand before she accepts Thomas’ engagement.

If Thomas wants Zoe’s hand in marriage, The Bold and the Beautiful spoilers say he’ll have to honor her public request. It’ll undoubtedly be some test that Zoe hopes Thomas will pass.

Zoe will hold out hope that what they share is real, but she’s just as much as pawn as Douglas is. For Thomas, it’s still all about securing a future with Hope.

Brooke Forrester (Katherine Kelly Lang) will see right through Thomas and his bogus relationship. She’ll call him out in an upcoming B&B episode for doing all this just to win Hope back. Brooke will probably insist that Hope doesn’t want Thomas and never will, but perhaps she’ll be wrong about that.

The Bold and the Beautiful spoilers say poor Douglas will be a mess after Thomas pops the question. He’ll turn to Hope with a desperate plea – possibly one that involves agreeing to marry Thomas instead of Zoe. It sounds like Hope will have a lot to mull over, so we’ll give you updates as other news comes in. You can check out all this B&B mayhem and more during the week of February 17-21!